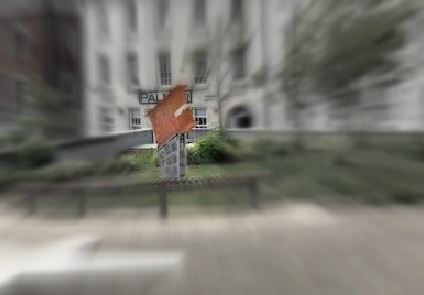 A memorial to those who lost their lives on 9/11 at the Twin Towers in New York is to be unveiled in Waterford City on Sunday next the 16th of September at 12pm.
The memorial, which is a piece of steal girder from the World Trade Center is mounted on a plinth of glass and is situated in the garden of the Bishops Palace in the city.
So how did a piece of the Twin Towers come to be in Waterford?
In 2006 whilst working at Waterford Crystal Sean Egan, a Master Engraver, was creating a 9/11 Sculpture in honour of the first responders who lost their lives that fateful day. While touring the Waterford Crystal factory Michael O’Rourke, a 26 year veteran of the FDNY, was amazed to see the image Sean was engraving was that of FDNY Chaplain, Father Michael Judge, being carried from the World Trade Center on 9/11.

Sean explained that he wanted to create a tribute piece for all those who died on 9/11, and was working on the creation in his own time. Sean shared his dream with Michael that he wanted to donate the finished masterpiece to the Fire Department New York.
Michael went back to New York and was instrumental in arranging for Sean to go to New York to donate his sculpture to the New York Fire Department. When Waterford Crystal heard that Sean’s 9/11 sculpture was to be donated to the FDNY in New York , they commissioned him to do a larger sculpture for the ceremony.
The 9/11 sculpture is filled with symbolism. The main piece, depicting five New York City workers carrying Father Judge, is a memorial to the 343 New York City Fire Department, 37 PAPD and 23 NYPD members, who lost their lives on 9/11.  The tall buildings shells represent all those who died in the World Trade Center that day.
In 2016, Sean, whilst working n a memorial sculpture for the Boston Marathon bombing met Fire Chief Robert Moran in Boston and asked if it would be possible to acquire a piece of steel from the World Trade Center to create a memorial to the first responders, who lost their lives in 9/11, in Waterford City.  Chief Moran approached the NY Fire Department (FDNY) and they graciously organised for a piece to be shipped to Waterford.

Sean commented, “FDNY do not usually consent to pieces from the World Trade Center to be shipped outside the USA so we in Waterford are especially honoured and privileged to have received this piece“.
“We sincerely hope that the memorial is a fitting tribute to the first responders who lost their lives on 9/11 many of whom have Irish connections and it is also in honour of our own first responders who keep us safe“ said Sean Egan.