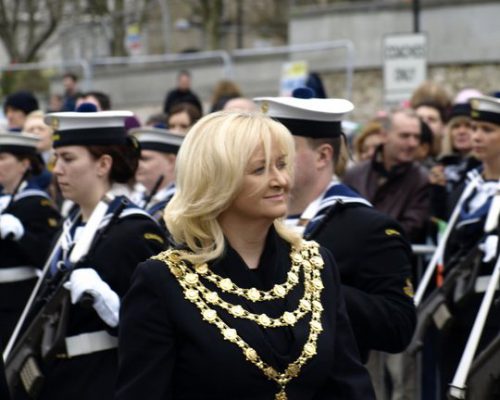 Councillor Mary Roche posted on social media that she is resigning from Waterford Council as from the 30th of November 2018.  After serving almost 20 years on the council and as Mayor of Waterford City in 2010/11 Mary quoted personal reasons for her resignation.

Cllr Rocke’s full post.
I wish to announce that as and from Friday 30th November 2018 I am resigning my council seat. Unfortunately personal circumstances have necessitated this move. There is no good time to take this step however once the annual budget meeting is completed next week, the main Council business for the year will be completed and there will be just 6 short months until the next local elections. I sincerely hope that more women will come forward to contest for mine and other seats next year.
I want to thank all my colleagues both sitting and former members of Waterford City & County Council and Waterford City Council for their support and courtesy over the past almost 20 years. Being a Councillor is oftentimes denigrated and can be a thankless role however most of the Councillors I have come across are dedicated to improving their local community – nothing more and nothing less. The time and commitment required has increased tenfold in recent decades however I do have concerns about the long term side-lining of the role of local government by central government which seems happy to blame it for many short-comings but continues to both denude it of authority and starve it of funding. I enjoyed the cut and thrust, the battles, the deliberations – all borne of a desire to deliver the very best we could for the citizens of this city and county.
I also want to put on record my respect for the Chief Officer Michael Walsh, the Directors of Service, all staff of the Council and the previous managers and staff for their professionalism and dedication to Waterford in what can be an invisible role. Keeping a city and county like Waterford running and growing and delivering opportunities and quality of life is no mean feat and doesn’t happen without huge talent, vision and effort on all their parts – often in the face of considerable difficulty and no little opposition.
I also want to thank the media for their many years of fair and comprehensive coverage of the business of the council and of councillors. They have largely been a constructive and positive influence in the community and beyond.
To all those who helped me to get elected, who pounded pavements, put up and took down posters and most especially those who voted for me and put their faith in my ability to represent them I say a massive thank you. Without you I – literally – could not have done any of it.
My final thanks is to my family who covered babysitting, campaigned, tested my theories, stood up for me and supported me in every way Liam, Ailish, Cillian and Carein. My mum and late, much loved, lamented dad and his special poster-taking-down invention (and yes it took those dreaded plastic ties too – he was most careful about that). My uncle Liam and his family.
My 20 years on the council have afforded very many highlights – too many to mention – however I cannot leave without saying that the opportunity to serve as Mayor of this ancient city in 2010/11 was the proudest time for me and my family and it will stay with me for the rest of my life.
I look forward to the challenges that the future will bring – I’m not going anywhere – as I bid a fond and somewhat sad adieu to my life as Councillor for Waterford.
Thank you.

A letter of her intention to resign has also been sent to the Mayor of Waterford Clr Declan Doocey and CEO of Waterford Council Michael Walsh.