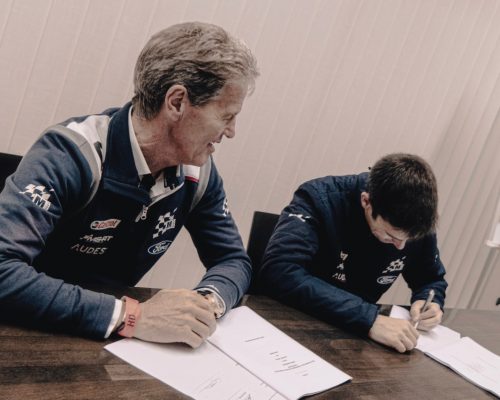 It’s the news we have all been waiting for, and M-Sport Ford are proud to announce that Craig Breen and Paul Nagle will spearhead the M-Sport Ford World Rally team’s attack on the 2022 and 2023 FIA World Rally Championship. The multi-year agreement will see their recent impressive performances rewarded with a full WRC campaign behind the wheel of the all-new M-Sport Ford Puma Hybrid Rally1 car.

In what is the most exciting development in the 31 year old’s WRC career, Breen will receive the full commitment and expertise of the Cumbrian squad as they aim to replicate their successes in 2017 and 2018, the last time there was such a radical overhaul of the sporting and technical regulations.
Having sampled the Puma Hybrid Rally1 car on gravel in Cumbria a few weeks ago, Breen was more than impressed and excited by the team’s latest creation and is now fully focussed on delivering the results and success that both he and the squad know is possible.

2022 will see all-new technical regulations, with the WRC moving to a new and exciting era of competition. Space frame chassis coupled with 100kw Hybrid Motors delivering additional 130hp bursts of power throughout the special stages and 100% sustainable fuel moves the sport into a more environmentally conscious direction, whilst still retaining the core DNA of the world’s most exciting off-road motor sport series.

Despite only ever having partial WRC campaigns to date, recent results have seen Breen and Nagle become the talk of the service park. A third placed finish on last weekend’s Rally Finland has meant the Irishman has achieved four podiums in his last seven events, and he currently lies 6th in the drivers’ championship despite only competing in half of the season’s events!

“Ford has always been very close to my heart as my career started in the Ford Fiesta R2 winning the Junior World Rally Championship, before winning the S2000 World Rally Championship in a Ford Fiesta S2000. I love rallying, every nuance of the sport, but especially the history. To add my name to the list of drivers that have driven for Ford is a bit surreal, drivers like Ari Vatanen, Hannu Mikkola, Colin McRae and Carlos Sainz. To have my name etched in the history books besides these greats is a huge privilege”.

“Being a very proud Irish man, to drive for Ford is something even more special to me as Henry Ford’s father was born in Ireland before emigrating to America. The love and passion for the brand in Ireland is still huge to this day”.

“I am humbled by the faith that Malcolm, Rich and everyone in the M-Sport team has shown in us. Now I really can’t wait to get to Casino Square, Monte Carlo for the opening round of the championship and do the blue oval proud!”