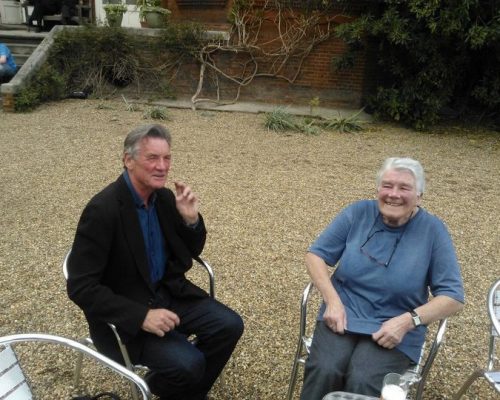 Waterford born travel writer and adventurer Dervla Murphy has died at the age of 90.

“I’m very much one for living in the present, and I’m content when I’m travelling or at home working on the next book or walking or cycling around west Waterford,” said Murphy in an Irish Times interview when she was 82″.(See full article at the Irish Times).

Full Tilt: Ireland to India with a Bicycle, is her best know work.  It recounts her journey by bicycle through Europe, Iran, Afghanistan, Pakistan and India.She worked as a volunteer with Tibetan refugees in India and Nepal and even trekked with a mule across Ethiopia.  Dervla took a break from travel writing on the birth of her daughter Rachel but later wrote of her travels with Rachel to India, Pakistan, South America, Madagascar and Cameroon.  She also wrote about her solo trips through Romania, Africa, Laos, the states of the former Yugoslavia and Siberia.

Dervla was born and brought up in Lismore, County Waterford. Her parents were from Dublin and had moved to Lismore when her father was appointed county librarian.

“She attended secondary school at the Ursuline Convent in Waterford but left at age 14 to take care of her disabled mother. As a young adult she took a number of short trips (between three and six weeks): to Wales and southern England in 1951; to Belgium, Germany and France in 1952; and two trips to Spain in 1954 and 1956. She published a number of travel articles in the Hibernia journal and the Irish Independent newspaper, but her Spanish travel book was rejected by publishers” according to her autobiography Wheels within Wheels The Making of a Traveller by John Murry, available HERE.

She has written over 20 books and her last book “Between River and Sea: Encounters in Israel and Palestine“, was released in 2015.

Dervla Murphy died on the 22nd of May 2022; she was aged 90. She’s is survived by her daughter Rachel and her three grand-daughters.

From the 2011 BMFF Program: Catch this rare opportunity to hear one of the world’s first woman solo adventurers- Irish treasure Dervla Murphy. Her first book, “Full Tilt: Ireland to India with a Bicycle,” has been followed by more than 20 titles.  She talks about her travels her passion about politics, conservation, bicycling, and a fine pint. Murphy’s autobiography Wheels Within Wheels: The Making of a Traveller, has been called, “an extraordinary book, reflecting an extraordinary woman and one of the greatest travellers of our time.”