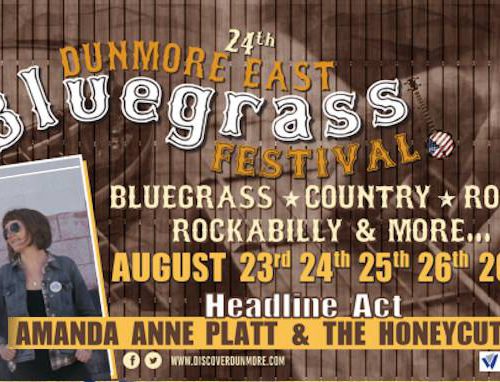 Now in its 24th year, the Dunmore East International Bluegrass Festival, is still proving as alluring as ever for top music acts, as some of the industry’s greatest bluegrass and country music acts line up for the free four-day festival in the Co. Waterford village from August 23rd to August 26th 2018.
With some top international bands lined up for the 24th Dunmore East Bluegrass Festival 2018, the homegrown musical talent is also making serious noises on the bluegrass and country scenes.
Mayo’s Vickers Vimy is a folk and Americana band that have worked with the late John Martyn, as well as The Hothouse Flowers, Maria Doyle Kennedy and Mundy. They released their first album Vol 1: That Vinyl Scratch in 2013 and since the release of their second album, Atlas of Hearts, in March 2018 this four-piece have regularly graced radio airwaves across the country.
Comprising of Ed Drea (vocals and acoustic guitar), Fintan Hanley (electric and acoustic guitars, mandolin, harmonies), Eamonn Mulderring (drums, percussion, piano, accordion, midi, harmonies) and Ciarán Byrne (bass, guitars), Vickers Vimy will play a series of free gigs throughout the Dunmore East Bluegrass Festival filled with rich eclectic sounds that anchor lyrical themes of scratched vinyl nights and hazy Sunday mornings.


Fintan Hanley said, “We’re delighted to be included in the line-up this year. There is so much good original Irish music at the moment and it’s great to see the Dunmore East Bluegrass festival enthusiastically supporting the Irish music scene.”
Another Irish act to make their Dunmore East Bluegrass debut is Navan based Pilgrim St. The seven-piece outfit bring a broad range of Americana, country, folk and bluegrass to their concerts across the country.
Having been together for over four years, Pilgrim St have played some of the finest arenas in Ireland including Vicar Street and Electric Picnic and Dunmore East Bluegrass festival-goers can expect a lively and energetic performance from Navan’s finest.
Mick Daly, Festival Organiser, is delighted to welcome homegrown talent to the festival this year.  “Bands like Vickers Vimy, Pilgrim St, Woodbine, and Mons Wheeler have been pioneering bluegrass, Americana and blues in Ireland for years and have lifted the profile of what once was a very niche music genre.”
“They’ve introduced this type of music to a cohort of new fans and that’s what rejuvenates the festival year after year.  We’re looking forward to hearing them on the stages over the four days and they certainly will make a big impression on anyone who likes a good lively, toe tapping tune.”

The 24th Dunmore East International Bluegrass Festival, Co. Waterford kicks off on Thursday evening, August 23rd at the Spinnaker Bar and Restaurant, and heralds the start of 14 bands, playing almost 40 free gigs throughout the village.
For more information visit www.discoverdunmore.com or keep up to date on the Discover Dunmore East facebook page.