€1 to Tramore with Leap Card 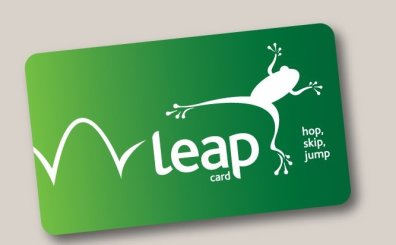 €1 to Tramore with Leap Card

It will cost just €1 with the  Leap Card promotional single fare on Bus Éireann’s Waterford city services and Route 360 (Waterford-Tramore), commencing Sunday, 27 January until Saturday, 2 March 2019.
All cash fares will remain the same. Bus Éireann, in conjunction with the National Transport Authority (NTA), recently introduced an enhanced Waterford city network which has, so far, resulted in an increase of customer numbers by over 35%.
Check out where you can buy a Leap Card.

Further improvements are also planned in Waterford for the first half of 2019, including:

There are 17 new state-of-the-art city buses on the city network, which are fully accessible and feature Transport for Ireland livery. The single-deck buses operate the five W1-W5 city routes and feature a bright, new interior design. The new buses also have comfortable seating, a dedicated wheelchair space, a separate designated child buggy space, priority seats, USB sockets, complimentary Wi-Fi, CCTV security cameras throughout, as well as journey information screens.
From 27 January, customers can travel on any of the five city routes and the Route 360 between Tramore and Waterford for only €1 on a single fare when using a Leap Card. Customers are guaranteed savings of up to 30% on cash fares by using their Leap Card throughout the year. For timetable information and service improvements see www.buseireann.ie/Waterford.  For more information on the Leap Card see HERE.
So where can I buy a Leap Card?  Find out HERE.