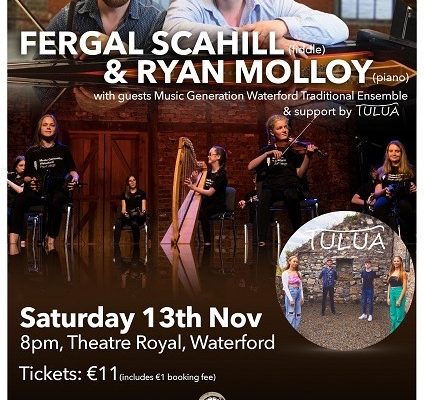 Join us for a unique night of Traditional Irish Music with Fergal Scahill (fiddle) and Ryan Molloy (piano), with guests Music Generation Waterford Traditional Ensemble and Tulua.
FERGAL SCAHILL
Multi-instrumentalist Fergal Scahill is best known as the fiddle player in award winning band We Banjo 3, recipients of the RTE Folk Awards Album of the Year 2018, Irish Times Album of the year in 2012 and two No. 1 albums on the Billboard bluegrass charts in the USA. His career has spanned over 20 years, winning All-Ireland titles at the Fleadh Cheoil on multiple instruments and group competitions, including the Senior All Ireland Fiddle competition.
Most recently, Fergal has gained international recognition for his Fiddle Tune A Day on social media, sharing over 730 tunes with hundreds of collaborations and tens of millions of views. Fergal has performed in over 30 countries and recorded on over 40 albums with musicians from all over the world, including three solo albums, six albums with his band We Banjo 3, two albums with his band Freewheel and two successful charity albums for Pieta House & The Hope foundation collaborating with some of the greats of Irish music.
www.fergalscahill.ie 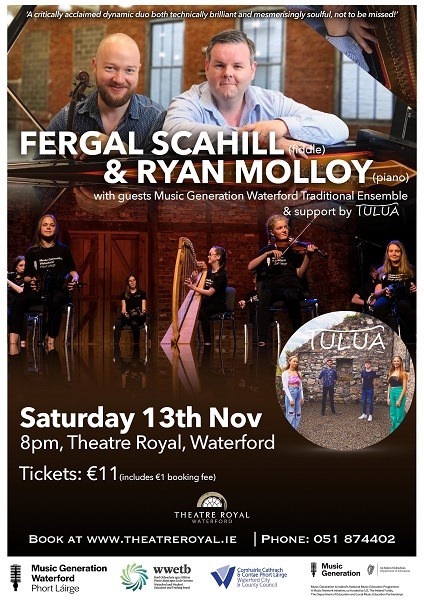 RYAN MOLLOY
Ryan Molloy’s compositional and performance work sits at the boundary of contemporary classical music and traditional Irish music and is internationally recognised for its cross genre innovation, musicality, and deep-rooted exploration of place and time, as well as its breadth in working with a range of musicians from young amateurs to seasoned professionals. Ryan’s has written over fifty works and his music has been performed to audiences on four continents for over fifteen years. His music has been broadcast both nationally and internationally, including BBC Radio 2, 3 & Radio Ulster, RTÉ Lyric FM, Radio 1 and Ráidió na Gaeltachta as well as on BBC 2, UTV, TG4 and BBC World. Ryan has been commissioned by both RTÉ and the BBC, as well as a range of renowned performers such as Darragh Morgan, Hard Rain Soloist Ensemble & the Irish Chamber Orchestra. He has represented Ireland at the prestigious ISCM New Music Days in Hong Kong (2015), Vancouver (2017) and Auckland (2022, rescheduled from 2020).
Ryan has recorded on over twenty albums as a pianist, composer and arranger. Described as a ‘milestone’ in traditional piano performance, 2019 saw the release of Ryan’s critically acclaimed first solo recording ‘pianophony’. 2021 sees the release of a new CD of music for uilleann pipes and piano (Tempered) as well as a new CD of vocal works, featuring the 30-minute song cycle ‘Buaine na Gaoithe’ performed by its commissioners, the Damselfly Trio. 2021 sees the première of works for the Westport Festival of Chamber Music, Dublin International Piano Competition and the ‘In Tune for Life Orchestra’ (a ‘trad orchestra’).
Ryan is Associate Professor of Composition at the National University of Ireland, Maynooth. Ryan is represented by the Contemporary Music Centre (www.cmc.ie).
www.ryanmolloy.ie
MUSIC GENERATION WATERFORD
Music Generation Waterford Traditional Ensemble was established in 2019 to provide an opportunity for young Irish Traditional musicians to experience ensemble performance of the highest quality. Since then the traditional ensembles have collaborated with many well-known professional musicians including Benny McCarthy (button accordion), Caoimhín Ó Fearghail (flute, uilleann pipes), Conor Arkins (fiddle), Siobhan Buckley (harp), David Lombardi (fiddle), Jean Damei (guitar), Martin Tourish (piano accordion) and Fergal Scahill (fiddle).
In 2019 the ensemble collaborated with Music Generation Carlow’s ReelÓg to work with Donegal Accordionist Martin Tourish to create a new 30min suite ‘The Colour of Warmth’ which was premiered at Creative Connexions Festival Sitges ‘19, Catalonia.
Music Generation Waterford Traditional Ensembles represented Music Generation Ireland on a worldwide virtual platform at The Ireland Funds Conference in late 2020. In 2021 the ensemble members collaborated with Winston Salem Youth Symphony Orchestras in Salem, North Carolina USA to celebrate Irish/American relationships for St. Patrick’s Day 2021 with a reflective orchestral arrangement of Mo Ghille Mear.
The ensemble under the direction of Nóra Byrne Kavanagh, Tommy Keating and Jack Kennedy are currently working on a collection of new works themed to reflect the topography and heritage associated with Waterford City and it’s environs. Two of these compositions aptly titled ‘Where the Barrow Meets the Suir’ and ‘Waterford Harbour’ will be performed at this evening’s concert, both composed by Nóra Byrne Kavanagh.
Music Generation Waterford is part of Music Generation, Ireland’s National Music Education Programme. A Music Network Initiative, co-funded by U2, The Ireland Funds, The Department of Education and locally by Waterford and Wexford Education and Training Board and Waterford Council.
TULUA
Tulua, meaning ‘becoming more’, began their individual journeys when they were younger playing in a local school of traditional music, where their traditional musical foundations were formed. As they grew older, they began to develop their own individual sound and passion for traditional Irish music and song and started to involve themselves in the scene, projecting their style to the public mostly through the nature of pub sessions and other shows, weddings, and competitions.
Sisters Kayleigh and Caoimhe had been playing with each other and creating their own sets and sound together, Diarmuid then began playing with them on several occasions and finally Cian was asked then to join the trio. Quickly they realised that their each individual styles and sounds together created something unique and different, resulting in a natural feeling and creative flow to the music.
Since then, the band have gone from strength to strength, playing across the country at various shows, festivals, and sessions as well as gathering a following and releasing their own music into the scene. After gathering momentum heading into the summer of 2020, many projects and plans were placed on hold due to Covid 19, including a tour in Holland and residency in America. Tulua are a local upcoming band whose creative focus is using traditional tunes and melodies to create a sense of story and driving energy in their music.