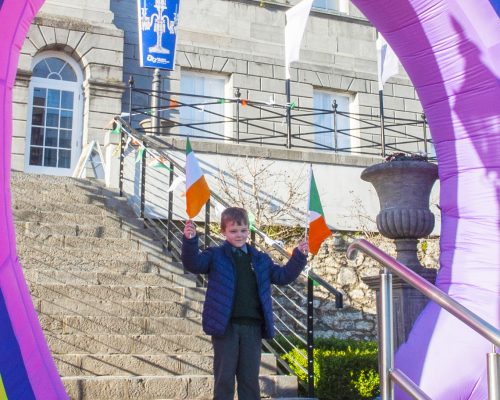 Lego-loving Finn Ryan from Ferrybank stole the hearts of the nation when he appeared on the Late Late Toy Show in November, and now he will lead the St. Patrick’s Day parade in Waterford as it makes a welcome return for 2022.

Mayor of Waterford City & County, Cllr. Joe Kelly said, “I don’t think that there could be anyone more deserving of the honour of Grand Marshall than Finn. I would like to offer my best wishes to Finn on becoming the Grand Marshall in such a momentous year for the parade, and to congratulate him on being a fantastic ambassador for Waterford.  I think I speak for everyone when I say that Finn made a lasting impression on his Late Late Toy Show appearance and his courage, bravery, strength and sense of fun had us all enthralled.”

“I look forward to seeing Finn lead the parade on March 17th and hope that he and his brother Liam have a day to remember. I also hope that the people of Waterford will get out and enjoy everything that is planned for the three-day St. Patricks Festival in Waterford.”

Finn’s Dad, Billy added “We’re delighted that Finn will lead the St. Patrick’s Day parade in Waterford.  We’ve always enjoyed the parade and the fact that Finn will be Grand Marshall and his brother Liam will be part of the entourage, will make it even more special for us this year.”

The theme for this year’s parade is ‘Waterford – Ireland’s Best Place to Live’ and the festival will pay homage to Waterford’s people and communities, its culture and heritage, its diversity, and its musical and artistic talent.

There will also be an online streaming of the Parade, so those who cannot attend or remain cautious about attending large events can still enjoy the celebrations.

To find out more details of the St. Patricks Day Parade and three day festival in Waterford visit www.stpatricksfestivalwaterford.com or keep an eye on WaterfordStPatricksDayParade social media channels.