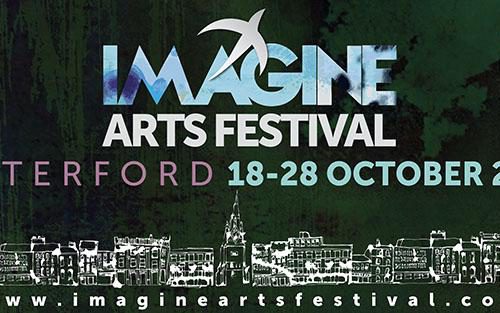 ‘Deliciously Dark’ best describes a key theme for this year’s Imagine Arts Festival, which takes place in Waterford City from the 18th – 28th October. Pre-Halloween high jinks for all ages come courtesy of a number of exciting premium events including the inimitable Spraoi’s latest production ‘Wicked Woods’; Stomptown Brass’ ‘Requiem for Truth’ featuring a raucous New Orleans style jazz funeral and Waterford Youth Arts’ ‘Horribly Historical Trails – both of which take place amidst the narrow back streets of this medieval City.

Those who prefer to walk in the light will not be disappointed with over 130 eclectic and international events to choose from which celebrate theatre, dance, music, visual art, discussion and debate. Imagine welcomes the return of the Waterford Writers Weekend this year which will be hosted by RTE’s Rick O’Shea and features interviews with some of Ireland’s leading literary luminaries including Authors John Boyne and Cecilia Ahearn.
Other highlights in this year’s Festival include a rare live recording of RTE’s Sunday Miscellany which celebrates 50 years this year; ‘Terakaft’ a Tuareg Rock Band from Mali; ‘Meeting Mr Ruckle – a retrospective exhibition of the work of American Artist Ernest Ruckle who resided in Waterford from the 1980’s until his recent death; David McSavage’s new show ‘A Terrible Want’ and a Mayoral reception for esteemed Irish film maker and Waterford native George Morrison featuring screenings of his movies including the powerful and iconic ‘Mise Eire’ plus the biggest flour fight to ever take place as clans of Vikings and festival-goers prepare for ‘Blaa-Mageddon’.

Imagine also welcomes the return of the ever popular Gala concert of internationally celebrated Irish musician and composer John Dwyer who will be joined by many friends and acclaimed musicians including the Castle Ceile Band and Sean Keane, renowned fiddle player with the Chieftains.
Other fabulous events not to be missed include Booze Blaas & Banter at Jordans Pub Parade Quay, The Session Trail, The Vintners Choons & Tales Trail and Beethoven at The Cathedral.
Enjoy the biggest and best Imagine Arts Festival yet!!

Waterford In Your Pocket is a proud media partner of the