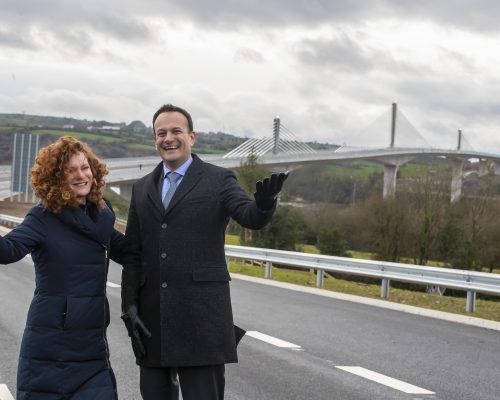 The 15km Bypass Project includes the 887-metre long structure named the Rose Fitzgerald Kennedy Bridge, Ireland’s longest bridge, and its two main spans are the longest post-tensioned concrete spans of their type in the world. The bridge crosses the River Barrow between Wexford and Kilkenny and forms a major part of the €230 million investment in the South East region and was delivered within budget.

The N25 New Ross Bypass, combined with the opening of the M11 Gorey to Enniscorthy motorway in July 2019, improves dramatically the overall connectivity and accessibility of Wexford, Kilkenny, Waterford and the entire South East Region.
The New Ross bypass scheme will be open to traffic at 12 noon on Thursday, January 30th. It will significantly ease chronic traffic congestion in New Ross town offering time savings of up to 30 minutes. Additionally, it will provide efficiencies on the strategic N25 route from Cork to Rosslare Europort while also supporting the future growth and sustainability of New Ross Town and the South East region. The scheme also links the N25 route with the N30 New Ross to Enniscorthy route

The 35th president of the United States, John F Kennedy’s ancestors hail from Dunganstown, Wexford. The Kennedy Homestead is less than one mile from the new bridge. President Kennedy proudly visited his family town of New Ross in the summer of 1963. The late president’s sister, former US ambassador Jean Kennedy Smith suggested the bridge be named after their mother, in memory of the entire extended family. For further details and to view progresss videos and timelapses of the Rose Fitzgerald Kennedy Bridge construction see: https://www.n25newross.ie/project-updates/
Further information:
The delivery of the N25 New Ross Bypass is the culmination of over 20 years work by Transport Infrastructure Ireland (formerly National Roads Authority), Wexford County Council and Kilkenny County Council as well as technical advisors for the scheme, Mott MacDonald Ireland. The project has been delivered as a Public Private Partnership (PPP) Contract between Transport Infrastructure Ireland and the PPP Company, consisting of BAM PPP, PGGM Infrastructure Coöperatie U.A. and Iridium Concesiones de Infraestructuras S.A.

Construction works were undertaken by New Ross Joint Venture, consisting of BAM Civil and Dragados. Arup and Carlos Fernandez Casado acted as designers for New Ross Joint Venture. On average, a workforce of 300 people was employed throughout construction and approximately 2.5 million work hours were completed on site to bring the scheme to fruition.

Taking into account optimal operational and safety considerations, the road will open to public traffic at noon on Thursday 30th January, 2020.

The Bypass is directly facilitating these initiatives by removing congestion from New Ross and arterial routes into the town.
Interesting Facts
Overall Project:

Other Figures of Interest

Archaeological Finds:
32 previously unknown archaeological sites were uncovered and excavated by archaeologists from TVAS (Ireland) Ltd. The record of these finds has now been filed for public viewing at the National Museum of Ireland.
The most significant discoveries include the foundations of a timber house at Ryleen. It was built by some of the first Stone Age (Neolithic) farmers who cleared the natural woodlands, 9th planted crops and raised their livestock in this area almost 6000  years ago. Cremation burials found in Berkeley, Camlin and Stokestown reveal aspects of our Bronze Age forebears’ belief 10th systems 3 – 4,000 years ago. At Landscape the remains of a 700-year-old medieval farmstead were uncovered.