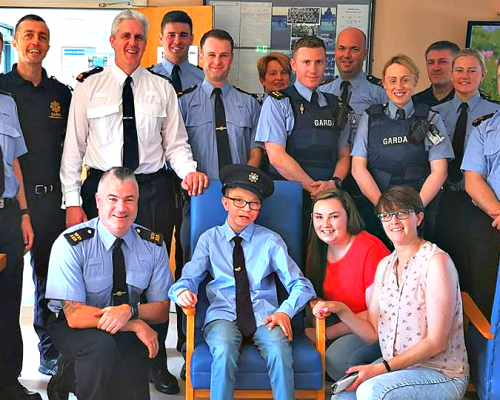 The 4th of July 2018, marked an important day for Jordan Power from Waterford. Not alone did he turn 15, but unbeknownst to him Gardaí in Waterford City had arranged with his Mam Gillian for him to come to the station at Ballybricken for a days work!
Jordan has always had an interest in An Garda Síochána, so when his Mam’s car was ‘pulled over’ on the Kilmeaden bypass little did he know what was in store for him.
Thanks to Little Blue Heroes, a Goodie bag was sent down to him to help him look the part.

After being escorted into the City by Gardaí, Jordan met with Supt. Delaney, Sgt i/c Langton, and all his colleagues for the day including Unit C, the Armed Support Unit, Traffic Corps, Comm Pol and the Crime Unit before heading to Waterford’s New Court House for a tour.

Afterwards there was Birthday Cake in the Canteen before Jordan logged off for the evening to celebrate and enjoy his birthday.

Little Blue Heroes is a not-for-profit charitable foundation established by Garda staff which aims to support local Gardaí in providing financial assistance to families in need in their local communities who have children undergoing long-term medical treatment for critical illness. In addition, the foundation aims to provide Garda themed distraction toys, activity books, and children’s events (e.g. Garda for a Day or Special Garda Open Days) for the children they support.

The Little Blue Heroes foundation is operated voluntarily by Garda Staff. It is open to all staff members of An Garda Síochána (including Civilian, Garda Reserve, and Retired members) to be a volunteer. The foundation receives no state funding whatsoever, and relies entirely on fundraisers and events organised by members of An Garda Síochána and others in the community to support the many families who need it.

The Little Blue Heroes foundation focuses completely on providing practical help for families who have exhausted all other avenues of assistance. The foundation believes that no family should have to face any added financial stress when they are already struggling to cope with the devastation and trauma of a critically ill child.