King of the Vikings 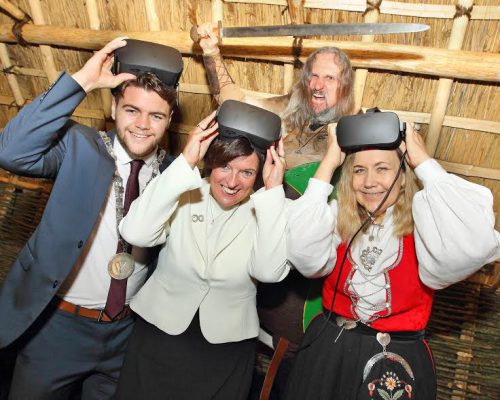 King of the Vikings

In 917, exactly  1100 years ago this year, Reginald, ‘King of all the Foreigners of England and Ireland’, led a huge fleet of Viking longships  into Waterford Harbour and built a fort on the banks of the majestic River Suir and laid the foundations of Ireland’s oldest city.  Reginald is forever associated with Waterford, his tower is the only monument in Ireland named in honour of a Viking.
Now thanks to funding from Fáilte Ireland Ireland’s Ancient East and Waterford City and County Council and the imaginative use of the latest virtual reality technology the momentous epic story of Reginald, King of the Vikings, is spectacularly brought to life.  This Viking Virtual Reality Adventure is a world first and is located in a reproduction Waterford Viking house in Bailey’s New Street, just three minutes walk from Reginald’s Tower, at the very apex of the City’s Viking Triangle, where Reginald built his fort in 917.

Your arrival at the new attraction is heralded by a mural that forms the atmospheric backdrop to a hand carved wood sculpture.  The visitor is beckoned to enter a darkened reception area by a hologram of King Reginald.  Once inside evocatively animated information panels slowly and imperceptibly draw you back in time and away from the hustle and bustle of the modern city.


Then thanks to ground breaking virtual reality visitors are invited to don special masks and are taken on a journey back to Viking times where the ghost of King Reginald spars with the ghost of an Irish Christian monk.  The innovative technology brings the epic adventures of the Vikings to life, allowing visitors to experience them in a close and personal way.  This meeting of history and technology will excite the imagination and ensure a memorable experience.  This latest attraction by Waterford Treasures has really captured the imagination of all.  Open to the public from 31st May.
Jenny de Saulles Head of Ireland’s Ancient East who will open the attraction, commented: ‘Fáilte Ireland are delighted to have provided funding of €145k for the King of the Vikings Virtual Reality Experience, through our New Ideas in Ancient Spaces capital grants scheme for attractions within Ireland’s Ancient East. This project is a great example of using modern technology to bring our history to life for the visitor which will appeal to a broader audience and bring a new added dimension to Waterford’s Viking Triangle.’

Her Excellency Else Berit Eikeland, Norwegian Ambassador to Ireland said: ‘I have followed this project from its inception and visited Emagine studios in Waterford where the virtual reality presentation was developed. The way in which the story of our Norwegian ancestors has been brought to life is stunning and has surpassed all my expectations. I urge anybody with an interest in our shared Viking heritage to visit King of the Vikings and experience it for themselves.’