Localbridge illuminated by birds in flight on Waterford Greenway 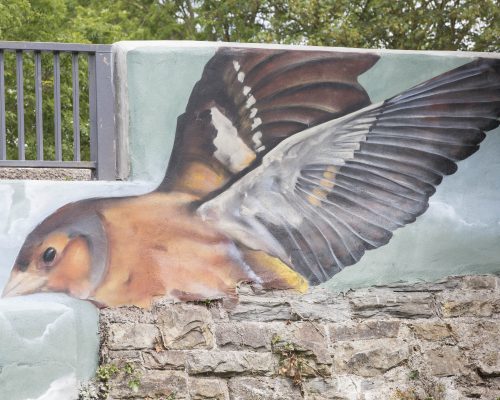 Localbridge illuminated by birds in flight on Waterford Greenway

‘Birds in flight’is the captivating new mural that has been unveiled by artist Curtis Hylton at Abbeyside Bridge in Dungarvan – transforming this integral part of the Waterford Greenway, into a stunning must-see urban artwork.
Waterford City and County Council has been continuously improving this part of the Greenway since 2011 when the Smarter Travel works were completed. The planting of wildflowers and installation of bug hotels and picnic areaswere added and each helped lift the entire area.

“The Greenway represents the best of Waterford and I felt the bridge was letting the side down. Itcertainly was not the welcomewe wanted to give to the thousands of new visitors passing under it along the Waterford Greenway as they enteredDungarvan for the first time.” says Colin Byrne, founder of the branding agency TOTEM.
Byrne was a huge fan of the Waterford Walls Festival, the international street art festival that brings some of the top street artists to Waterford to transform the city into an incredible outdoor gallery.
Inspired by their mission to use art as a medium for rejuvenating and inspiring urban spaces, he saw a fantastic opportunity to creatively solve the problem at Abbeyside Bridge, by bringing the Waterford Walls to Dungarvan.

Byrne approached The Walls Project, Waterford City and County Council and local company Shanley Industrial Engineering Ltd to come on board with TOTEM as a patron of this unique project.
“Waterford City and County Council was delighted to be involved in this very worthwhile project. Artist, Curtis Hylton and the Walls Project have created a fantastic artwork that will no doubt be enjoyed for years to come along this part of the Waterford Greenway. It is yet another example of the potential of the Waterford Greenway being realised and of how projects like this can add value for all that visit.” Said Cllr Damien Geoghegan, Cathaoirleach of Dungarvan and Lismore Municipal District who was on hand to help officially unveil the new artwork along with other sponsors and supporters.

“We are absolutely delighted to work in partnership with local communities to develop this exciting and innovative project enhancing the experience and atmosphere of the Greenway. And we set ourselves the unique challenge to deliver an unobtrusive yet effective and creative lighting design for the bridge that would complement the art installation.” – says Managing Director, Brian Shanley.
UK street artist Curtis Hylton agreed to create the artwork. He is an artist that is incredibly passionate about biodiversity with a stylethat merges wildlife with botanicals.Curtis’s often uses his spaces to make bold statements focused on highlighting the importance of protecting native habitats and species, like our Irish Honey Bee.

As you approach the bridge now,your attention is immediately captured by the vibrant, bold and colourful images of ourlocal birds–thechaffinch, blue tit and little egret. And as you walk underneath, any sense of foreboding is replaced by awe, as lighting by Shanley Industrial Engineering Ltd, illuminates a stunning ceiling artwork of a sky going from dawn to dusk filled with silhouettes of birds inflight.

It has been a project that has been a full year in the making, with so many people and organisations locally giving their support to help make it happen.
“I’m delighted to have had the opportunity to bring The Walls Project to the west of the county and to havebeen part of transformingAbbeyside bridge into something that creates the right first impression of our thriving town.” says Byrne of TOTEM.

“And I have to say a huge thank you, to the companies who’ve come on board as sponsors to help make this idea a reality – CentraNugents, The Cliff House Hotel, Cork Airport, The Moorings, The Tannery and 360 Cookhouse. And to our other supporters Cass & Co, IQ Branding, Merrys Gastro Pub and the Shanahan Family from Abbeyside. Without their support, it just wouldn’t have been possible.”
Projects like this, show what can be achieved when communities, local businesses and the arts come together to creatively tackle problems.
Edel Tobin, speaking on behalf of The Walls Project says, “Colin from TOTEM first approached us with his idea for this artwork on the Abbeyside Bridge, back in early 2018. And we couldn’t be more delighted with the outcome. So many people got involved to make this project happen and to see the beautiful results now, makes all their tireless efforts worth it. A big thank you to the incredible and hugely talented CurtisHylton for his stunning artwork.” 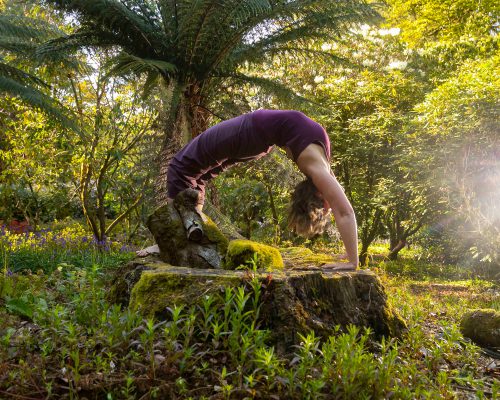