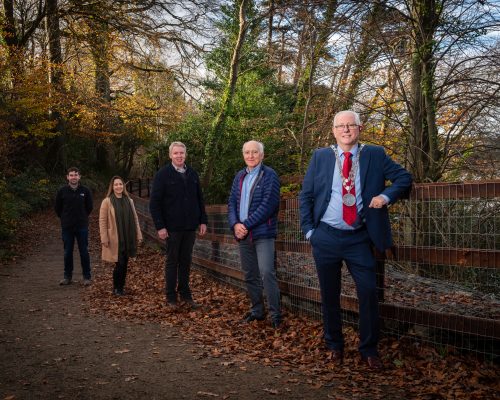 New River Walk: With construction complete on the enhanced Suir River Walk, the newly extended pathway from Maypark Village to Cove Lane was opened to the public this week.

Improvements to the 3km of woodland trail included the widening of paths, realigning of the path to avoid mature trees, the installation of culverts, fencing, and a new entrance was created at Cove Lane, while the entrance at King’s Channel was improved.

Overall, the works have improved access to the trail, and made it more accessible to a wide range of users.

Fergus Galvin, Director of Services, Waterford City and County Council said that the improvements will undoubtedly make the trail even more appealing.  “It was a somewhat well kept secret amongst those in the vicinity.  While the infrastructure was already there with a path from the Kings Channel entrance right through to Freshfield, these works have greatly enhanced the trail, and extended it a further 500 metres to Cove Lane.”

“Since the closure of the Snowcream site, Waterford City and County Council has agreed to purchase the site which includes Goff Woods from Glanbia.  The natural woodland area on the banks of the Suir has been inaccessible for many years and this trail which was developed under licence from Glanbia will enable the public to enjoy the woodland again.”

“Our ultimate ambition would be to extend the pathway all the way into the heart of the city centre creating a continuous 4.3km long path from Ballinakill to Georges Quay and we will be developing plans during 2022 to achieve this.”

The walkway is bounded by the River Suir to the north and sloping woodlands to the south.  With intriguing glimpses of the River Suir, careful consideration has been given to the preservation of the indigenous woodland, which comprises of oak, yew, holly, beech and ash trees.  The new pathway that runs the length of the trail is littered with fallen leaves to give a slightly yielding surface, which is perfect for walkers and runners.

Waterford City & County Mayor Cllr. Joe Kelly acknowledged that enhanced pathway is a welcome addition.  “This original walkway was of huge benefit to those from the area, however with the improvements and extension it is will be an amenity that can be enjoyed by many more.”

“It is a wonderful addition and the improvements to the surfacing will make it a viable option for walkers, joggers and families wishing to enjoy the outdoors”.

The works were completed in 2021, after Waterford City & County Council received funding from the National Transport Authority under the July Jobs Stimulus Plan for the development of Cycling and Walking Projects.

The funding is designed to support local authorities’ response to Covid-19 challenges and assist with their work to equip local communities and businesses with improved walking and cycling infrastructure.  Three sections of the Suir River Walk were completed by three local contractors, Liam Whelan Plant Hire, Richard Forristal Ltd and Mallwood Ltd, with expenditure totalling €366,000 in 2020-2021.