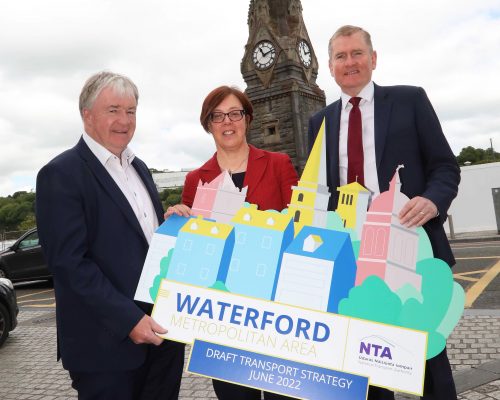 WMATS has been developed by the National Transport Authority (NTA) in collaboration with Waterford City & County Council, Kilkenny County Council, Southern Regional Assembly (SRA) and Transport Infrastructure Ireland (TII). The strategy provides a framework for the planning and delivery of transport infrastructure and services in Waterford over the next two decades.

The projected 541% increase in cycling is set to be enabled by the delivery of a safe cycle network consisting of 100km of cycling track and a 54km greenway network. Among the primary cycling routes to be improved within the Waterford Metropolitan Area include:

The draft strategy recommends progressing with the development of a new sustainable transport bridge providing pedestrian and cycle connectivity across the River Suir. Through the provision of 43km of new and upgraded footpaths, the number of daily walking trips in Waterford will increase by 55% by 2040.

Another key objective of the draft strategy is the roll out the BusConnects programme in Waterford. This is set to include the provision of 63kms of bus lanes and bus priority measures across the Waterford metropolitan area. 75 new zero-emission buses and a park and ride facility will be required to service an expanded bus network spanning 100km.

The draft strategy also supports the relocation of Plunkett Station to a new site in the North Quays Innovation District to create a more direct access to Waterford City via the new sustainable transport bridge.

Future investment in road transport will be focused on maintaining, renewing and managing existing road infrastructure. This includes supporting the improvement of the existing N24 between Waterford and Cahir and the N25 between Waterford and Glenmore, in line with the provisions of the National Development Plan. The proposed Ferrybank Relief Bank would connect Belmont Roundabout to Newrath and help create an urban village within Ferrybank.

Minister for Transport Eamon Ryan said: “With Waterford set to grow by at least 50% by 2040, there is a need to scale up the public transport network and encourage active travel to and from the city. This Strategy published by the NTA today provides the blueprint for making this possible. The proposed expansion of the bus network will help encourage more people onto public transport while the delivery of a safe cycle network will increase the numbers cycling into the city by 541%.

“Through Government support, I’m confident we can deliver an integrated transport network that enables the sustainable growth of the Waterford metropolitan area and creates an attractive, accessible and connected city.”

Anne Graham, CEO of the NTA, said: “The draft strategy unveiled today is focused on investing in sustainable transport and meeting the needs of a growing city.

“From BusConnects to new walking and cycling infrastructure, there is a unique opportunity to promote public transport and active travel in communities across Waterford. By rolling out these measures, we can help contribute to a 56% reduction in carbon emissions within the metropolitan area by 2040.

“Public consultation on the draft strategy gets underway today and runs for six weeks. I would encourage everybody to look at our plans and have your say.”

“This new transport strategy will be instrumental in the regeneration and transformation of Waterford as a sustainable city. Providing new bus corridors and cycle tracks on routes into the city will entice more people from their cars and onto more sustainable transport modes.

“Once finalised, we can put in place the transport infrastructure that supports the development of the Waterford metropolitan area as the major growth engine of the South-East.”

A public consultation on the draft WMATS, which gets underway today, will run for six weeks until June 2022. As part of the consultation process, two public information events will be held on Wednesday, 15th June from 2pm to 8pm and on Thursday, 16th June from 10am to 4pm at the Tower Hotel Waterford.