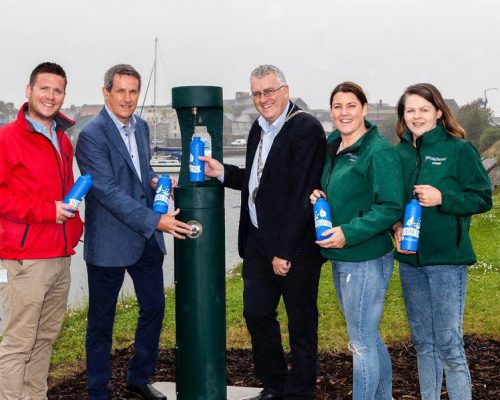 Posted on July 10, 2019 by waterfordcouncilnews
The Mayor of Waterford City and County Council, Councillor John Pratt has launched water bottle refill stations on the Waterford Greenway. These stations are now located along the Greenway at Abbeyside, Ballylynch Cross, Kilmacthomas Station and Bilberry to enable Greenway users to refill their water bottles as they enjoy the Waterford Greenway.
The refill stations were funded under the Local Authority Prevention Network, which works to prevent waste in Ireland and were supplied by www.ecofil.ie

Speaking at the launch in Abbeyside, Mayor of Waterford City and County Council, Councillor John Pratt said “I am delighted to see these water bottle refilling stations installed at four locations along the Greenway. With over 70 million plastic bottles sold in Ireland every year, single use plastic water bottles account for a large proportion of waste and the installation of these bottle refill stations will help to prevent this.”
“It is important to make an effort to reduce the amount of single use plastic bottles used. These bottles also represent a significant amount of litter in our beautiful county. In fact, over 80 per cent of all coastal sites surveyed during CoastWatch’s most recent All-Ireland CoastWatch Survey were found to be littered with plastic. The surveyors found an astonishing average of 18 plastic bottles for every 500 metres of the coastline.”
Plastic bottles recycling bins were also launched on the day.  These bins which were an initiative of Tramore Tidy Towns were trialled on the Promenade in Tramore last year and proved so successful in segregating plastic bottles that they have been introduced at four additional locations; Kilbarry Nature Park, The People’s Park in Waterford and Abbeyside, as well as a second location on the Prom in Tramore.  The bins were manufactured locally in Dungarvan by Coffey Engineering.
“Ireland is currently recycling only 35 per cent of its plastic waste, with the rest going to landfill, incineration or thrown away carelessly on our streets and into our hedgerows, waterways, and seas” stated the Mayor. “The Greenway is a popular route for cyclists, runners and walkers so these stations are a valuable amenity which benefits County Waterford’s environment as well as health. We are working to keep it litter free and these plastic bottle bins will encourage more plastic bottles to be taken out of the general waste stream to be sent for recycling.”