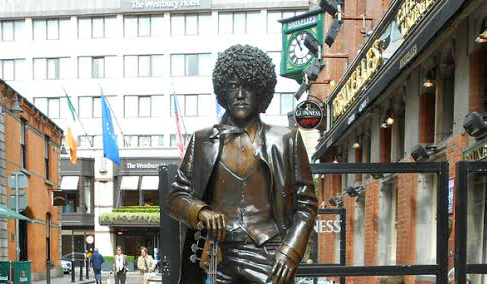 The 4th of January 2017 marks the 31st anniversary of the death of Philip Parris Lynott, the charismatic leader of Irish hard rock band, Thin Lizzy.
This is the Waterford connection.
I am Kilkenny born and reared, however as a child I spent many summers in Waterford, Tramore to be precise as my grandfather lived there in retirement. I later came to live and work in Waterford in 1975. While I’ll always be jokingly regarded as a ’blow-in’, I see Waterford as my home.
I’ve been a fan of Thin Lizzy since 1971, even before ‘Whiskey In the Jar’ hit the charts.
I was never a fan of the showbands that dominated the Irish entertainment scene in those days. I was still a 13 year old but I somehow knew exactly what I liked even if I didn’t quite understand it. Radio Luxembourg was the saviour for my friends and myself at that time. We would religiously tune it to hear Cream, Hendrix and the rest and lapped up every glorious note.


The arrival of Thin Lizzy was, quite literally, music to our ears. Then to realise that they were an Irish band and that the lead singer was black with a very thick Dublin accent, well, the affect on a young teenage music loving Irish boy is almost indescribable. At last, a band I could relate to. I was utterly hooked.
From than on I would watch out for anything in the print media or anything on tv. I soaked everything up. Each new release from the band was eagerly and excitedly lapped up. Every song learned. Who played what. Who produced and so on.
Years later working on pirate radio, I had the opportunity to not only meet but interview Philip!  What a buzz. You can hear the interview below. Listen carefully and you can hear the nerves come through the shaky questions. Philip was in this early thirties then, but he had a presence about him that commanded attention. Not in an overwhelming way. He exuded confidence and yet he made me feel comfortable from the get go. Remember, he was used to being interviewed by seasoned journalists and I at that stage was just a wet nosed wanna be DJ, so far out of his depth.
Fast forward to the early nineties. I had always wanted to run a tribute night in Waterford but not a run of the mill gig with a band just covering the songs. No, I needed a ‘special guest’. So, I wondered if his mother Philomena would come to Waterford if I could manage to pay her accommodation. I don’t remember how I came by her number but I did so I rang and told her who I was and my plan. Turns out my night was the first she attended since Philip died. We have been firm friends ever since. I have spent many a night at her home in Sutton, talking about everything. She loved regaling stories about Philip and life with Thin Lizzy on the road. Every so often the phone would ring and she’d spend time chatting. “oh that was Scott (Gorham)” or “The was Slash’s management inviting me to tomorrows gig “ and so on. She even asked me to read at the funeral service for her long time partner , Denis, who passed away in 2010, something I was honoured and proud to do.

Through this friendship, I was invited onto the Roisín Dubh Trust committee, (of which I am still a member) which was set up to commemorate Philip’s artistic life. It was via the Trust that I became involved in the drive to have a statue of Philip in Dublin. Following five years of fundraising and hard graft, Philomena eventually unveiled the statue on August 19th 2005.
The area around Harry Street was thronged with supporters, Dubliners and tourists (who had no clue of what was happening but staying to find out), TV and radio crews, photographers and VIPs. All vantage points were secured.
The designated enclosure around the statue filled with invited guests, members of the Trust, Dublin’s Mayor, Councillors involved with the project. Names like Smiley Bolger, Jim Fitzpatrick, Brush Sheils, Chris Tsangarides, and former members of Thin Lizzy, Eric Bell, Brian Downey, Scott Gorham, the late Gary Moore, Brian Robertson and Darren Wharton.
Despite a few incidents when the statue was damaged by delivery vans backing into it, the statue in Harry Street (off Grafton Street, in front of Bruxelles and the Westbury hotel) is one of the most visited and photographed in Dublin.

So next time you see it, now you know the connection with Waterford!
My love of all things Thin Lizzy and Philip Lynott remains unabated. Through it I have made many good friends in many parts of the world and I have become friends with many of the Lizzy circle, something that the fourteen years old me would have only dreamed about.
Because of my love of Thin Lizzy back then, I became interested in other Irish bands and from that grew the reputation I now have regarding Irish bands and their promotion. It’s something I am extremely proud of and thanks to radio and the radio show I currently have on KCLR in Kilkenny, it is something that I continue to love and enjoy.
…Roddie Cleere 4th January 2017