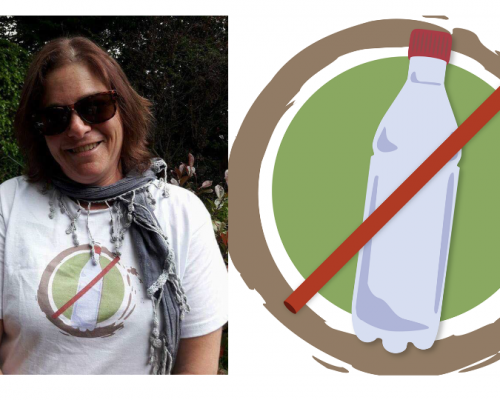 “My name is Jennifer Harris and I am originally from Boston but moved to Waterford in 2005. I have worked both in development and in education and feel lucky to have a job that lets me do both. I think back on all the waste that we humans create over the course of our lives and I really think there is something wrong with us. No other animals wilfully destroy their own environments.
Waterford is so beautiful and it really angers me when I see people throw their trash to the side of the road or leave it on the beaches. I want my children and their children to walk on clean beaches and climb hills without having to step over plastic waste. But mostly, the reason I am pushed to pursue this Campaign is for the animals. Over a million sea creatures die each year because they eat plastic instead of food. They starve to death with their stomachs full of plastic. And that’s our fault, we have done this. No one is going to fix it for us, we have to stop this completely insane reliance on single-use plastic.

As Manager of the Waterford One World Centre, I do a lot of work with young people, either through schools or youth groups, raising awareness about global issues. This past year we were working around the theme of ‘The Problem with Plastics’ and the young people were really impacted by it and there was this sense that we should do something more. Not just leave it there at the end of the school year and that was when I got the idea of trying a Plastic Free Waterford Campaign after seeing the good work that has been done by those campaigns in Galway and Kinsale. So now we are very excited to be officially launching the Campaign on Friday, 8 June at St. Patrick’s Gateway Centre with the Mayor of Waterford, Cllr. Pat Nugent, some of the cast from How We See the World, representatives from our flagship businesses of Momo, An Uisca Beatha and Blackfriars Coffee, and music from the Sunday Drivers.


The Campaign will work throughout the summer to raise awareness culminating in a Plastic Free Waterford Week starting 10 September – 16 September and we have over 50 businesses and schools who have already agreed to not use or distribute single-use plastic during the week. Our hope, of course, is that when businesses owners see how easy it is to not rely on single-use plastic that they will make the switch on a permanent basis.
Let’s hope some of you can make it on the night it would be great to see you there.”