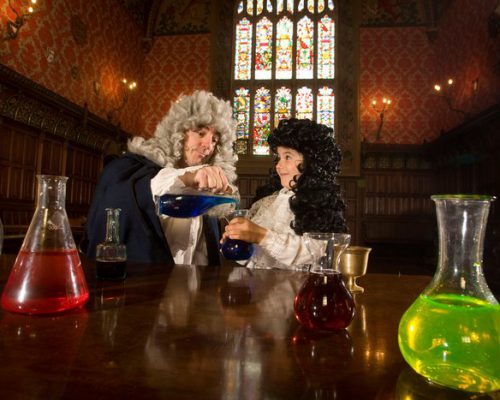 THE centuries-old fascination with prolonging human life and today’s technologies and science that allow greater health, strength and mental function will be under the microscope as researchers and medical experts gather with members of the public for a lively discussion about the opportunities and problems of what was once science fiction but is now becoming possible.
‘Superhuman’ is the theme for this year’s Robert Boyle Summer School which runs in Waterford city and Lismore from June 20 to 23. It will demonstrate how Science and Technology is catching up with mythology and we are now poised to create Superhumans.

The gathering will consider the possibilities and perils of human modification and performance enhancement. Leading experts will also explore genetic modification, designer babies, bionics, prolonging life and implications for humanity.
Among this year’s expert contributors and participants are Prof Niall Moyna, known for his work with television shows, Operation Transformation and Doctor in the House, as well as regular radio show contributor, Prof Luke O’Neill.
“The Robert Boyle Summer School celebrates the life and work of Ireland’s most important scientist, Robert Boyle, and is Ireland’s only summer school for adults addressing science and culture, organiser, Eoin Gill, says.
“We have a major crisis in today’s world with misinformation, fake news and populism drowning out evidence and reason. Society was happy to leave science to the scientists and scientists were quite happy with that too.
“Now, the public want to know more about science and what it will deliver for them and scientists want to engage with the public in an accessible way. The Robert Boyle Summer School was established as a meeting place where experts and the general public can meet and learn from each other. It is the only festival of its type in Ireland.”
The engaging Robert Boyle Summer School programme, which is booking up fast on  https://www.eventbrite.ie/e/robert-boyle-summer-school-2019-waterford-and-lismore-tickets-59714201785 and on www.robertboyle.ie, includes the perfect mix of interesting talks, panel discussions and debate as well as social events. The highlight will be a garden party in stunning Lismore Castle, the birthplace of Robert Boyle with baroque music, local artisan food by Eunice Power and Robert Boyle Gin cocktails from the local Blackwater Distillery.

“Our Summer School is a must for adults interested in engaging with new ideas in history, science and culture and in discussion in a friendly, relaxed setting. Human evolution by natural selection is a long and slow process. But we now have knowledge and technologies that can enable us to make greater advances in human health, intelligence, performance and longevity than ever before.
“Robert Boyle was the most influential scientist of his time back in the 17th Century. He compiled a list of things that he thought science might deliver. Many of the items on the list have been delivered by science. Many represent the interest of the times and many are related to enhancement of human life and performance. The first on his list is the ‘prolongation of life’– a preoccupation of sentient humans through history. Even though average life expectancy has doubled since Boyle’s time, it is still a preoccupation,” Gill revealed.
The four day programme opens with a fascinating talk by Prof Annraoi de Paor on Superhumans in Ancient Irish folklore: the career of Lugh Lámhfhada. It also includes a talk with Dr Natalie Kaoukji, Cambridge University, on what prolonging life might have in common with mechanical flight or breathing under water. Artist Nuala Clarke will relate how her latest exhibition was inspired by Boyle’s writing and experiments on colour.
Prof Luke O’Neill, author of critically acclaimed book “Humanology”, will explain how a new technique CRISPR can alter the genes in a cell making it possible to change traits in human embryos to eliminate genetic defects but also makes it possible to select for other “desirable” traits.
The title of Prof. Niall Moyna’s talk is ‘Stone Age Genes and Space Age Technology – the Impact on Human Health’ and he will examine how despite extended longevity and medical advances our lifestyles are making us sick and explain how advances in smart phone technology have the capacity to deliver a new medical revolution.
Prof Tomás Ryan will probe the future of human evolution, while Dr Oliver Feeney will look at the ethical, legal and societal issues involved in genetic engineering. Robotic limbs, bionic eyes, exoskeletons, electronic nerve implants and brain-computer interfaces are being developed to assist the ill and infirm. Prof Madeleine Lowery will look at these technologies and consider what they will deliver.
The coordinators, Calmast, Waterford Institute of Technolgy’s science engagement centre, will also continue the school’s tradition of recreating Boyle’s original experiments.
The annual cultural Summer School was established in 2012 and is organised by Calmast at Waterford Institute of Technology and Lismore Heritage Centre, with support of Lismore Castle, the Robert Boyle Foundation, interested groups and professional bodies and industry in the region.
About Robert Boyle
It has been said that Robert Boyle, the ‘Father of Modern Chemistry’, was the most important scientist ever born in Ireland. In fact, it has been argued that of all historical figures born in Ireland, he had the greatest impact on the course of human history.
Robert Boyle was born in Lismore Castle on 25th January 1627.  He was the youngest- and favourite- son of the Great Earl of Cork, Richard Boyle and his second wife Catherine Fenton.  Robert spent his early childhood at Lismore before being sent to Eton at the age of 8.  At 11 he was taken out of school and tutored at the Great Earl’s new English base, Stalbridge House and shortly after, dispatched on a Grand Tour of Europe with his older brother (Francis, aged 15) and his tutor, before returning to England and devoting his life to writing and scientific research.
In 1655, Boyle moved to Oxford where he joined the Invisible College – a group of natural philosophers that foreshadowed the Royal Society that was founded in 1660. About this time Boyle employed Robert Hooke to help him with his experiments. Together, they built the air-pump used in many of Boyle’s most important experiments, including establishing the necessity of air for combustion, for animal breathing, and for the transmission of sound. Boyle also proved the inverse relationship between the volume of a gas and its pressure, enshrined in science textbooks across the world as Boyle’s Law. Often called the “father of chemistry”, he gave the first modern definition of an element and thought that the behaviour of materials could be explained in terms of atoms (which he called corpuscles) and energy. In 1668 he moved to London to live with his sister, the remarkable Lady Ranelagh where they worked together.  Boyle died within a week of his beloved sister in 1691.