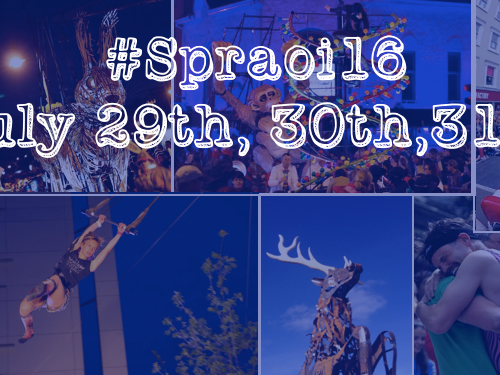 Spraoi Street Arts Festival is Irelands biggest and best street festival and this year it will  present an exciting international programme of street performances  that has made Spraoi famous, not only in Ireland but throughout the world!  Get your programme HERE
Waterford In Your Pocket will be out on the streets in force bringing those of you who can’t join us here in Waterford city photos, live stream, video and much much more.

From Mexico to Australia, and from Ireland to Sweden, Spraoi Festival 2016 will see artists from all over the world perform amazing, spectacular, extraordinary shows. Here is the line-up of companies and artists appearing at Spraoi 2016, many of which are Irish premieres.
Spraoi’s street theatre is second to none and you will be amazed at the shows that are on offer which are completely free!  Check out their listings HERE

Looking for music?  Then we have you covered with live music all over the city with the Maxol Main Stage in John Roberts Square, which will feature “Cry Before Dawn” on Sunday the 31st of July, the Hop House 13 Rhythm Route and Street Music featuring an Argentinian Milonga and much much more!
Of course the high light of the weekend is the parade which will take place on Sunday the 31st at 9.30pm followed by the annual firework show.

So where did the idea of Spraoi come from?

The idea back in 1993 was simply to have some fun and perhaps a little madness on a Summer Sunday. This initial idea materialised as a one-day event held on the streets of Waterford City. It was so successful that an idea grew; perhaps it could become an annual summer festival in Waterford? Thus began it all. And what has since developed is one of Ireland’s leading street arts companies: Spraoi.
Spraoi is now a well-established and renowned street theatre company. It is perhaps best known for its annual Festival and Parade held every August Bank Holiday weekend. The Festival, devoted to Street Art has become a firm favourite amongst locals and tourists alike and attracts an over 100,000 people to Waterford City over its three days. So much so there is no longer an August Bank Holiday Weekend in Waterford, it’s now better known locally as “The Spraoi Weekend”.

See you over the weekend and have an enjoyable and safe weekend!  Lets make it a festival to remember!