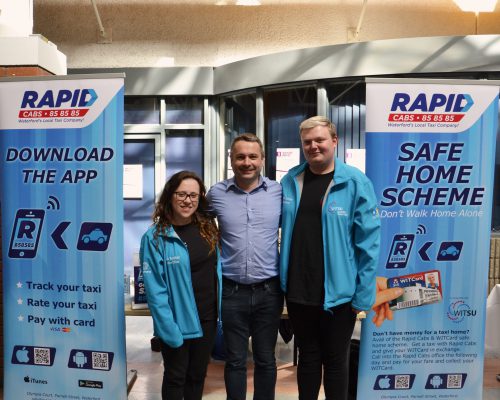 Now in its third year, Rapid Cabs and the WIT Students’ Union want to reiterate their message to students starting their academic year, “Don’t walk home alone”.
Rapid Cabs CEO Eric O’Brien, explains the importance of this message to students, “In our industry we see it all. Being safe when out at night comes down to making smart decisions. That is why messages like this are so important. It seems obvious not to walk home alone but when you are out and have no money, you do not think you have a choice. Now you do.”
You’re a student of WIT and out for the evening. You’ve run out of money, lost your wallet or purse and it’s time to go home. However, now you can get a taxi with Rapid Cabs rather than walking home on your own. Just leave your WITCard with them and pay your fare when you collect it the next day.


“Waterford City does not differ from any large urban environment, it is no safer or more dangerous that any third level City, but people need to plan their night out, and that includes getting home”.
John Fortune, WITSU President endorses this new initiative, “WIT Students’ Union are delighted to once again, work with Rapid Cabs to ensure that all WIT students have a safe way to get home whether it be day or night time. With this scheme our students can exchange their student card for the taxi ride and then pick up their card when paying for the ride in the following days. This scheme makes Waterford a more attractive place to both students and parents as it provides a peace of mind knowing there is always the option to pay later!”
The ‘Safe Home Scheme’ is now in place and will be promoted through-out the Institute campus and on local radio.
The scheme was nominated by Purple Flag Waterford and achieved runner up in the Best Safety, Security and Resilience Scheme at the International ATCM awards held in Camden Town, London on the 26th June, 2019. WIT, Rapid Cabs and Purple Flag Waterford are actively promoting the scheme throughout the city
Rapid Cabs is a licensed taxi dispatch operator by the National Transport Authority and all of its drivers are fully Garda vetted, insured and licensed. Open and accessible 24 hours a day 365 days a year, Rapid Cabs has a computerised booking dispatch system from its local taxi call centre and has installed in-car driver devices in all of its taxis to ensure as such efficiency as possible.
Its App is available for free on Apple and Android at https://bitly.com/taxi_app