Summer in the City 2019 Announced! 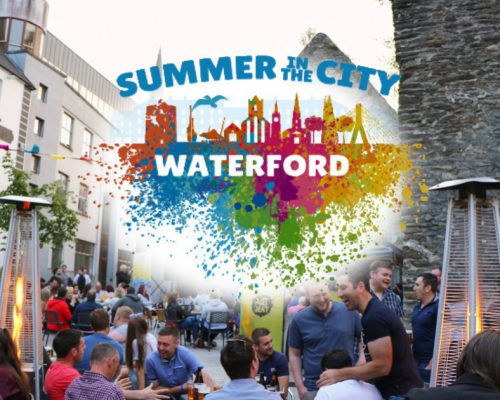 Summer in the City 2019 Announced!

The organisers of Summer in the City – Waterford’s free, summer-long music and arts festival – have announced the programme for 2019, and it’s an absolute cracker, with this year set to be bigger and better than ever before! Funded by Waterford City and County Council and Waterford Viking Triangle and produced By Central Arts and Partners, Summer in the City takes places across the summer months from June 1 to August 17 with events taking place on four stages across five areas of the city – and it’s all entirely FREE!

On top of that, there’s a whole additional programme events to include something for absolutely everyone with: family fun, acoustic sessions in Bailey’s New Street, a comedy club, Battle of the Bands, Speaker’s Corner, puppet shows, brass bands, DJ Daveyboy’s on-street Indie Disco, street workshops, facepainters, crafter’s corner and Waterford’s Biggest Colouring Book!
The main areas where the activity all takes place this year are: the newly-added Apple Market, an amazing season of events throughout Waterford Viking Triangle, Centre Stage and Family Fun in John Roberts Square, Artbeat and The Churchyard Sessions in Bailey’s New Street, Block Parties in Waterford Cultural Quarterwith Tully’s Bar and Crinniú Na nÓg (‘The Gathering of the Young’) on June 15.
Summer in the City is funded by Waterford Council and Waterford Viking Triangle and spported by The Reg, The Munster Bar, Tully’s, Rapid Cabs and Waterford Cultural Quarter. With loads more info, announcements and details to come, keep and eye to FaceBook or on Waterford In Your Pocket and the new Summer In The City website coming soon!