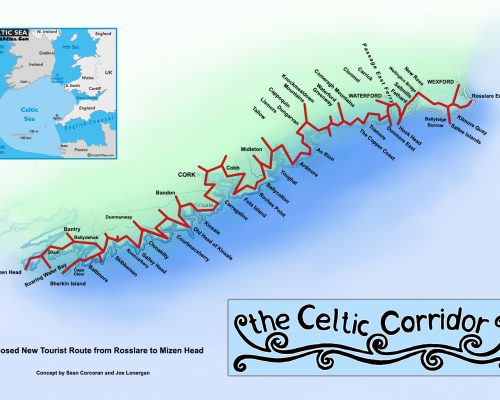 On July 20th a small group will embark on a 12 day journey across Ireland to explore the potential of establishing a new initiative called The Celtic Corridor. Starting in Rosslare, they will travel along the southern coastline through Wexford, Waterford and Cork to reach Ireland’s most south-westerly point, Mizen Head by the 1st of August.

Depending on the chosen route it’s likely to be at least a 350km journey and some of the team intend to walk every step of the way! We also have 3 people that will cycle it and 3 people that will kayak it! Each day a piece of sand art will be created on one of the stunning beaches along the way. Some of the team will explore the attractions and facilities along the way as we will try to experience what this route has to offer in lots of different ways. All are welcome to join in, walk for an hour or for the day! Join the sand art team on one of their projects. Show us the hidden gems in your community. Be part of the conversation about the potential of The Celtic
Corridor.

This is a voluntary initiative. Any support along the way, whether it’s the use of the community hall or a breakfast for the crew would be greatly appreciated. We’re a happy go lucky bunch on an adventure across Ireland but we’re hoping to make a difference by encouraging sustainable tourism along The Celtic Corridor.
We have chosen this route because of its untapped potential and we hope to be able to strengthen the cultural connections between the coastal communities. Many connections already exist including sport, dance, music, mythology, language, place names and family connections. It is hoped that this project will put a spotlight on these connections and encourage others
to take up the challenge…

Find Your Own Way

Find your own Celtic Corridor. Do it your way! Do it on foot, on a bike, in a car or in a kayak! Do it anytime that suits you. Do a section at a time. Drive it over a long weekend. Walk it at your leisure.
Similar to a corridor in a building having many doorways on either side we believe that the Celtic Corridor will highlight much more than just a coastal route. Go inland, through the unspoilt countryside, villages, mountains, castles and gardens. Go along the edge, find the lighthouses, harbours and hidden beaches. Do it in style, hopping between hotels and B&B’s
or fill your rucksack with all you need and head off on an adventure into the great unknown.
The attached map shows a rough outline of the meandering route showing some of the key locations along the way. As you can see from the map The Celtic Sea itself extends exactly from Rosslare to Mizen Head. Its perimeter also includes parts of Wales, Cornwall, Devon and Brittany in France so there is great potential to make connections further afield. We believe that an initiative like this would enliven the existing culture and heritage while bringing economic benefits to the coastal communities. It will connect people and opportunities along the way.
The concept for the Celtic Corridor was devised by Sean Corcoran and Joe Lonergan. Sean and Joe work together on lots of different creative projects including sand art events and festivals. They are being joined by their friend Dermot Walsh and a small team to explore the potential of the route. Sean was the founder of the Walk from A to B, a 230km annual walk from Allihies in West Cork to Bunmahon in Waterford. Sean and his wife Miranda run an art school called The Art Hand that is located on The Copper Coast in Waterford. They specialise in community events and collaborative art projects.
So follow in our footsteps. Do The Celtic Corridor. We challenge you!