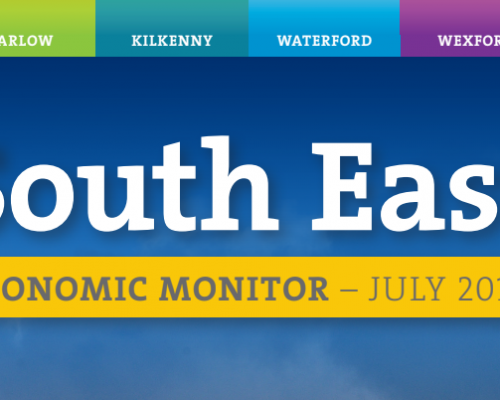 The South East Economic Monitor 2019 shows that the South East economy is now growing again, albeit at a much slower rate that the rest of the country, after a very difficult 2017/8.  (Download the full report at www.senser.ie )

The report, now in its fourth annual edition, aspires to present a selection of key economic indicators for the South East region, to aid understanding and inform decision making and is prepared by independent, non-politically affiliated academics.
The report is prepared by John Casey, Lecturer in Accounting, Dept. of Accountancy & Economics, WIT; Dr Ray Griffin, Lecturer in Strategy, Dept. of Management & Organisation, WIT and Dr Cormac O’Keeffe, Lecturer in Finance, Dept. of Accountancy & Economics, WIT. All opinions expressed are those of the authors and do not represent those of WIT, WIT School of Business, AIB-CRBR or CEDRE
According to one of the report’s authors, Dr Ray Griffin, “it is a relief to see the mild reversal of fortunes with an increase in employment of 3.3% and other sentiments measures which are now positive.”

“The contraction of 2017/8 was not a blip. With the investment programme for Ireland 2040 now being visible it is clear that Dublin, with 28% of the population is to receive 64.2% of the exchequer funding into major infrastructure investments between 2018-22. With 8.86% of the population living in the South East, just 0.56% of funding for major projects will come to the region suggesting the region’s economic malaise will continue indefinitely,” he adds.
The report, now in its fourth year of publication, highlights the South East labour market’s return to growth with 5,900 jobs (+3.3% in employment) added in the region. Despite this, the gap between the unemployment rate in the region and the state widened last year.
The South East is the region not yet to have reached the Government’s Action Plan for Jobs (APJ) target of bringing regional unemployment to within one percentage point of the State average and the data demonstrates it got substantially worse in 2018/9.
There is also evidence of low job quality as the returns for taxes on work (PAYE, USC, and self-employed taxes) in the South East are 52.2% of the national average which means that more people in the region are paid less.
Ireland 2040 plan
Despite significant political and policy promises that the region would not be forgotten, analysis of the Department of Public Expenditure’s capital projects tracker shows that Dublin is receiving double the infrastructure investment per capita of the other regions, with 42 significant capital infrastructure projects (>€20m) listed accounting for 64.2% of committed exchequer spending (2018-2022). “This suggests that the Government’s stated ambition of balanced development throughout the country, with double the population growth in city-regions relative to Dublin has already been abandoned in practice,” says Dr Griffin.
Stark assessment
Despite the return to growth Dr Griffin goes on to say that “The very pronounced deficits in regional higher education capacity, acute hospital services, and IDA supported-employment drive, ever lower job quality and is envisaged to continue under the Ireland 2040 and regional enterprise plans. At the moment, independent of international economic contractions arising from Brexit and trade wars, we see a likelihood that the region will return to the woes of 2017/8 in the short to medium term. While many good things are being done in the region, the region is being treated unfairly at the national table and this has economic and social consequences.”
Overall- Government Capital Investment
Of great concern is that of significant capital projects (>€20m) identified by the Department of Public Expenditure, a mere 0.6% is earmarked for the South East. Even adding back in the two Wexford Motorway PPP schemes this only rises to 2.9% of the 2018-2022 investment programme. Commenting on the figures, one of the report’s authors, Dr Ray Griffin, said that “it is almost inevitable that the region will be left further behind and the figures suggest that the government’s regional development strategy is predominantly rhetoric.”