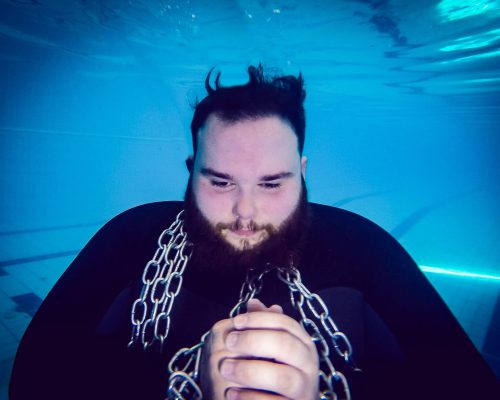 Waterford Mentalist and Escape Artist Dean Jacob is attempting an Houdini style underwater escape.
Over the past few months Dean was training at the Waterford Crystal Leisure Centre to prepare himself for a death defying escape from 40 feet of chain, 7 padlocks, 20 feet of rope, hand restraints and 50kg in additional weight, all whilst holding his breath 2 meters underwater at the pools deepest end.

Dean Jacob, who is from Johns park in Waterford, says he started magic at the young age of 7 and from then, it became an addiction His love for magic led him to studying the mind and how people think, which peaked his interest in using psychological techniques to make people believe he can read minds, implant thoughts and even predict the future. While studying about body language and figuring out how people’s minds work, Dean also had a great love for the art of Escapology, and became fascinated with the most famous magician and escape artist Harry Houdini, “Growing up I always wanted to be like Houdini, I always wanted to do an escape that I knew he would be proud of and I believe this is it, and where better to do it then my hometown, surrounded by people who have been with me since the start of my magic career.”

The stunt itself will take place on the 28th of October in the Waterford Crystal Leisure Centre on the Cork Road. When asked why he picked this date Dean said “ It’s the closest date I could get to Houdini’s death with was the 31st of October 1926, I don’t think that I could pay him a better tribute then to try an escape as death defying as this holding my breath so close to the time he took his last.”
Dean admits that although he is a magician, this will be no trick. Everything he will be doing underwater, from holding his breath to picking each lock, is REAL and with that carries a REAL chance of something going wrong. “Of course it is an underwater escape and although it will be in a pool, I will have safety divers there on the day, but it would take them at least a minute or more to reach me and as fast as that may sound up here on solid ground when your 2 meters under the water seconds can feel like minutes”
Dean has been training during public hours in the Waterford Crystal Leisure centre Monday to Friday and invited people to come along and see for themselves that what he is going to attempt on Sunday the October 28th is real and requires the training.