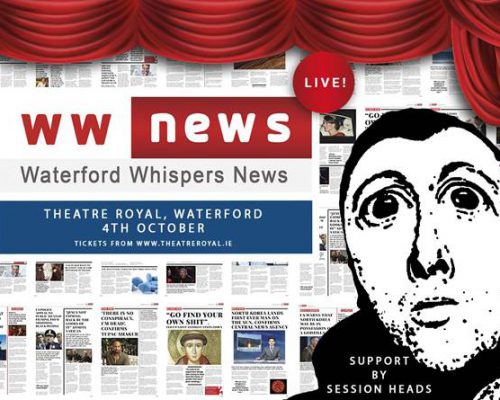 WATERFORD WHISPERS TURN INTO A ROAR

Irish satirical powerhouse Waterford Whispers News brings you the hometown preview of their brand-new feature length live show.
With previous headlines like ‘Jesus Not Coming Back by the Looks of it, Admits Vatican’; ’Dozens Injured in a Stampede as Second Checkout Opens in Lidl’; and “North Korea Lands First Ever Man on the Sun’, Waterford Whispers News is everybody’s favourite daily dose of online satire acquiring more than 14 million readers last year in pretty much every country in the world (except of course North Korea).

So sharp and incisive are the headlines, that Waterford Whispers News has made the actual, real news on many occasions, with pastors in America’s bible belt railing against the Jesus story from their pulpit, while Lidl’s German management team told their Irish staff that they never wanted to see headlines like the stampede story again and several media organisations like CNN reporting the North Korea landing a man on the sun story as fact.

There’s an inspired darkness that sometimes comes through too with pieces like ‘Bodies of 800 Children Were “Just Resting” in Mass Grave, Claims Catholic Church’ and ‘Woman Next to You on a Plane Doing that Annoying Quiet Crying Thing’ referencing to the 8th Amendment.
All of this means that Waterford Whispers News has become an Irish institution, read and shared all over the world, so much so that we often refer to real headlines as being like “something from Waterford Whispers”.
This brilliance has now been developed into a stunning live show set in a newsroom in a parallel satirical universe, but one that’s strangely familiar.
Two foxy WWN news anchors, assisted by weather, sports, foreign affairs and celeb reporters on VT, present a rapid-fire, subversive, rollercoaster of a production, along with some of your favourite Waterford Whispers stories, and even more new ones specially produced for this no holds barred live show.
Produced by Waterford Whispers News and Schweppe Curtis Nunn.

18+. May contain offensive dialogue and imagery. You know yourself…
Shows starts at 8 p.m. Tickets €19 available from Box Office/Tel: 051-874402 or www.theatreroyal.ie
More information available from www.waterfordwhispersnews.com