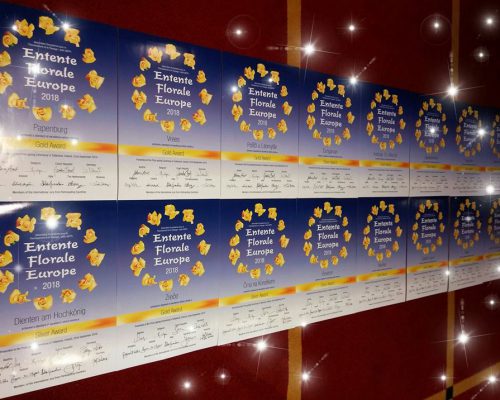 Last night in Tullamore the winners of the Entente Florale  were announced with Dungarvan awarded a Silver medal in the towns category.  This wasn’t the only prize for the Sunny South East as the picturesque village of  Inistioge in Kilkenny was awarded Gold.
There was also a great win for Waterford with the Waterford Greenway winning the Jury Chair’s Prize “Prize for Mitigation of climate change”.
“This thematic prize is for a project that is specifically related to mitigation of climate change using planting schemes and other appropriate measures such as flood alleviation and the reuse of materials such as stone or metal in the construction of facilities” according to the Entante Floral Website.


Cllr Damien Geoghegan said “It’s a marvellous result to take silver in such a prestigious competition, and enormous credit is due to everyone who made such a fantastic effort during the summer months. Waterford City and County Council, Dungarvan Tidy Towns and the business community in Dungarvan all working in collaboration made this win possible. Dungarvan is a fantastic town with a great history, but I believe its best days lie ahead”.
Geoghegan went on to say, “It’s awards like this that allow us to build on our successes to date, and they give encouragement to strive to be even better at what we do from a tourism point of view. The special award recognising the Council’s work in developing The Greenway is the icing on the cake, and it’s wonderful to see the judges in such a prestigious competition from throughout Europe, recognise The Greenway for the great facility that it is. It certainly makes all the time, effort and indeed money that was invested in the project by Waterford Council all the more worthwhile, and gives us even more strength now from a marketing point of view”
Goes to show what can be achieved when like minded people get together what can be achieved.
AWARDS 2018
Awards Villages
Dienten (Austria) – SILVER
Poříčí u Litomyšle (Czech Republic) – GOLD
Vrees (Germany) – GOLD
Lajoskomárom (Hungary) – SILVER
Inistioge (Ireland) – GOLD
Ingria (Italy) – SILVER
Cabella (Italy) – SILVER
Črna na Koroškem (Slovenia) – SILVER
Awards Towns
Nivelles (Belgium) – GOLD
Beveren (Belgium) – SILVER
Papenburg (Germany) – GOLD
Veszprém (Hungary) – GOLD
Dungarvan (Ireland) – SILVER
Zreče (Slovenia) – GOLD
Thematic prizes
“The Restoration of a Public Open Space” (Presidents prize)- Veszprém (Hungary)
“Prize for Mitigation of climate change” (Jury Chair’s Prize) – Dungarvan (Ireland)