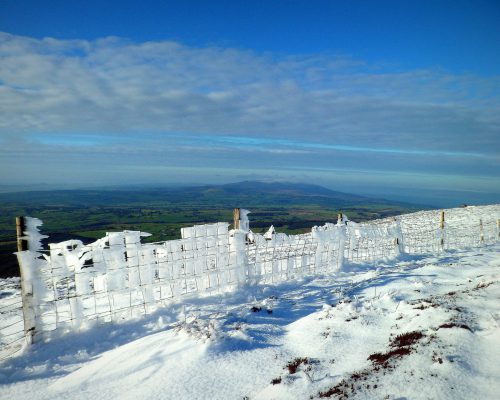 Waterford’s Snow, it’s not a myth.

Our Winter so far

Waterford’s snow, despite the bitter cold weather that’s been keeping us huddled up by the fire the last few weeks, Waterford’s winter season has actually been pretty good so far! The heating is on 24/7, and I wouldn’t dare leave the house without a thick coat. But I wake up most mornings seeing a bright blue sky with the sun shining.
Sure, we see the usual rainy day once or twice a week, and the odd week of almost constant rain. But we’ve seen summers that were wetter over the last few years! and even more winters that were unbearably wet AND cold.

But for as long as I can remember, we very rarely ever had snow. Maybe one full day of snow every few years, or at least a few minutes of snowfall which melted almost immediately – but that’s it!  Waterford’s snow? Never heard of it!
So far we haven’t been so lucky to wake up to a snow covered Waterford this winter season, but the higher peaks throughout the county are a different story! The highest points have been constantly covered in a thin layer of snow and ice over the last few weeks and we’ve been lucky to set our eyes on some beautiful photography of it. Here’s a look at some of our favourite snaps of Waterford’s snowy mountains by some of Waterford’s fantastic photographers!
[gdl_gallery title=”comeraghs snow gallery” width=”135″ height=”90″]
Special thanks to the people who contributed to this gallery: