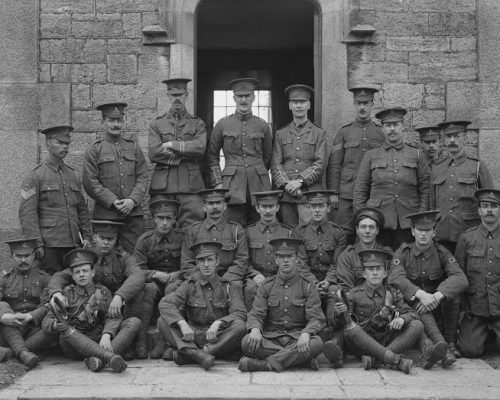 Christmas 1915
In Britain the outbreak of war was met with patriotic fervour as men rushed to enlist. Enlistment here in Ireland was encouraged by influential figures such as John Redmond MP. Many believed that Home Rule for Ireland would be the reward for the Irish contribution to the war effort, a short sharp war and home for Christmas was predicted.
The war started badly for the Allies with the German Army boldly sweeping through Belgium to launch a devastating attack on France. The Germans knew that they would face War on two sides and they hoped for a quick victory against Allied forces in the West before the large but cumbersome Russian army could fully mobilise.
Initially the German battle plans followed their pre-war predictions but just 30km outside Paris the retreating French Army stood their ground at the bloody Battle of Marne. As the allies counter attacked the Germans dug defensive trenches and by September 1914 trench warfare had begun. This static grinding form of warfare would dominate the face of the conflict for years to come.


1915 would see the allied forces try to break the deadly stalemate of trench warfare. Allied high command wanted a return to a war of movement and thousands would die as different tactics and new technologies were experimented with. Poison gas was one innovation that would be first used by British forces at the Battle of Loos in September 1915. Despite initial panic amongst the German forces when the wind changed the gas proved lethal to both sides.
Strategic changes were also tried to break the deadlock in France. British high command would try and open a new front in Turkey to draw German forces from the west. The disastrous Dardanelles campaign would start in April 1915 and be drawing to close by Christmas 1915. The low point of this campaign would be the ill-conceived landings at Gallipoli the brainchild of a young Winston Churchill.
On the home front back in Waterford people began to realise that this wouldn’t be a quick war. The full scale of the tragedy that was The Great War was beginning to unfold. By Christmas 1915 Agnes Collins of Philip Street would have received news of the death of her 16 year old son Stephen. This would be the first of four sons lost to Agnes and the Collins family. One can only imagine the heartbreak caused to Agnes Collins.
As casualties mounted more young Waterford men would lose their lives like Maurice Day and Joseph Marshall. By Christmas 1915 tragedy and loss affected every social class and background, young Joseph Marshall was a talented member of the Erin’s Hope Prize Band. Maurice Day was the son of the protestant dean of Waterford and was the first of two sons the Dean would lose in the War. As well as the increasing sense of the tragedy, the global scale of the conflict would become known to people though deaths like that of Maurice Day who would fall fighting in Africa.
By now every family would know someone who had either lost a son or had one return from the front injured. The patriotic fervour had died down and there was talk of conscription coming to Ireland to feed the war machine. As the War at sea raged on food shortages became common with imported goods becoming increasingly scarce. The newspapers would soon stop printing news of deaths from the front as it was deemed detrimental to morale. Sadly for many there would be little to celebrate in Christmas 1915.
James Doherty for Waterford In Your Pocket