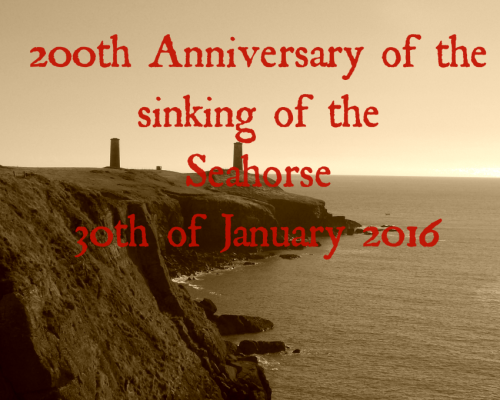 200th Anniversary of the sinking of The Seahorse at Tramore
On the morning of January 30th. 1816 the transport vessel Seahorse was blown along the coast from Mine Head. The ship attempted to get to Waterford Harbour but due to the gale, high seas and the sails torn to ribbons it couldn’t weather Brownstown Head. It anchored beneath Brownstown attempting shelter and at 12.00pm. the anchors dragged. At 12.10pm. the ship struck the beach at Tramore and within an hour went to pieces due to the mountainous waves and gale. Although there were thousands of would-be rescuers on the beach it was impossible to attempt a rescue as the ship hit the sand approx. one mile out. This resulted in the loss of 363 lives including soldiers of the 59th. Regiment and some of their families, 33 women and 38 children.
The Sea Horse tragedy has left a lasting mark upon the people of Tramore. As a part of the remembrance, the Sea Horse committee has engaged the community, as the history of the Sea Horse is a collective story that belongs to all of us. ‘The commemoration can only take place with the support of our community’, stated Tracy McEneaney, the Chair of the Sea Horse committee.
The three primary schools along with Ardscoil na Mara have been busy creating images, animations shorts and documentaries, and producing writings and poems which will be on display in the Coast Guard Station in the week leading to the commemoration.

Socially engaged artist Jane Butler has further been busy working within the community with groups and individuals whose efforts will produce the hand-printed artwork ‘363, More than a Number’. The artwork pays homage to the 363 victims of the Sea Horse, and each individual victim is represented by a block printed silhouette on a fabric panel. These 363 individual fabric panels will be joined together to create a large scale artwork that honours each individual victim of the tragedy. All those who have participated in creating the artwork are asked to remember an individual man, woman or child on the anniversary of their death. ‘363, More than a Number’, will be on display during the Remembrance Service on the 30th January and in various other locations in the months to follow.
Other community groups who have lent their support and who will also volunteer on the day include the ICA, Tramore Heritage, Tramore Tourism and Tidy Towns. A number of events are scheduled for the 30th of January with many stewards and volunteers required to assist. Those wishing to lend their support for the commemoration should contact the committee via the Sea Horse Commemoration face book page.