Dungarvan first in national roll out of RNLI throw bags 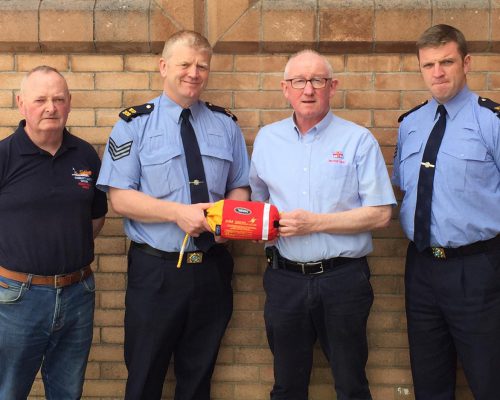 Dungarvan first in national roll out of RNLI throw bags

Two years ago the RNLI Launched the throw bag initiative on a particular busy stretch of the river Thames in London which has proved to be a huge success and has saved many lives since its inception.
“I thought this would be ideal for Dungarvan Harbour and contacted RNLI HQ in Ireland. They were delighted,” said Nicky Hannigan DLA Helvick Lifeboat Station.

So he met with Jenny Beresford, CEO Dungarvan & West Waterford Chamber of Commerce with a view to introducing throw bags and training the staff members of the businesses on Davitt’s Quay, Dungarvan on their correct use in case of emergency.
She arranged meetings for Nicky and RNLI Community Safety Officer Austin Flynn with Susan Denn of the Interlude Restaurant, Marie Quinn of the Moorings Bar & Restaurant and Ray O’Brien from the Anchor Bar all located on Davitt’s Quay in the heart of Dungarvan, Co Waterford, where there is a vibrant social scene.

All three business owners had an absolutely fantastic reaction to the initiative.

“Training in the correct use of the throw bags has now taken place, and we are pleased to have the initiative up and running in time for the summer!” said Nicky.
Because the Gardai are usually the first on the scene of an emergency, he also met with Sgt Alan Toft in Dungarvan Garda Station and now there is an RNLI throw bag in all patrol cars in the District.
Respect the water. The RNLI is the charity that saves lives at sea.