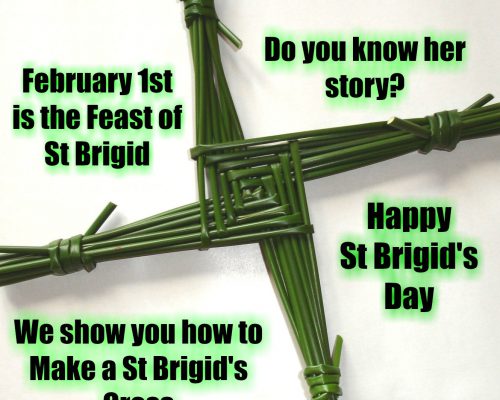 The story of St Brigid

And How to Make a St Brigid’s Cross

The 1st of February is the feast of St Brigid and is also known as Imbolc which is one of the four Gaelic seasonal festivals along with Beltane, Lughnasadh and Samhain and marks the start of spring St Brigid is one of Ireland’s patron saints along with St Patrick.
A story that is associated with Brigid was when she was travelling to see a physician for her headache. She stayed at the house of a Leinster couple who had two mute daughters. The daughters were travelling with Brigid when her horse startled, causing her to fall and graze her head on a stone. A touch of Brigid’s blood healed the girls.  In many parts of Ireland people put a piece of blue ribbon hanging outside on the night of the 31st of January into the 1st of February when it is believed that it will be blessed by Brigid and the blue ribbon can help cure migraine headaches.
One of the iconic symbols of St Brigid is her cross and here is a video to show you how to make it!

One of the more commonly told stories is of Brigid asking the King of Leinster for land. She told the king that the place where she stood was the perfect spot for a convent. It was beside a forest where they could collect firewood and berries. There was also a lake nearby that would provide water and the land was fertile.
The king laughed at her and refused to give her any land. Brigid prayed to God and asked him to soften the king’s heart. Then she smiled at the king and said “will you give me as much land as my cloak will cover?” The king thought that she was joking and, hoping to get rid of her, he agreed.
She told four of her sisters to take up the cloak, but instead of laying it flat on the turf, each sister, with face turned to a different point of the compass, began to run swiftly, the cloth growing in all directions. The cloak began to cover many acres of land.
“Oh, Brigid!” said the frighten king, “what are you about?” “I am, or rather my cloak is about covering your whole province to punish you for your stinginess to the poor.” “Call your maidens back. I will give you a decent plot of ground.”
The saint was persuaded, and if the king held his purse-strings tight in future, she had only to allude to her cloak to bring him to reason. Soon afterwards, the king became a Christian, began to help the poor and commissioned the building of the convent.

So where ever you are in the world reading this Happy St Brigid’s day!