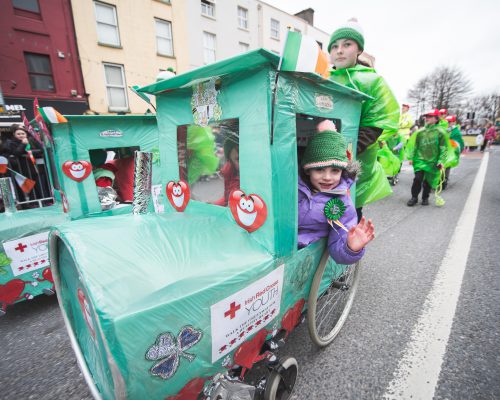 Waterford City is the place to be for St Patrick’s Day Celebrations!
Waterford is set to have a fantastic day of celebrations for the annual Waterford City St. Patrick’s Day Parade. The Vikings will once again walk the streets of Ireland’s Oldest City as the parade theme for this year is “Our Viking Heritage”. Mayor of Waterford City and County, Cllr. Pat Nugent is delighted to announce Her Excellency Else Berit Eikeland, Ambassador of Norway to Ireland as this year’s Grand Marshal.
This year’s Viking theme also ties in with Ireland’s very first International Viking Festival which will take place here in Waterford over the Easter bank holiday weekend.
The St. Patrick’s Day festivities will begin with a performance from Higgins Academy of Irish Dance at the viewing stand on The Mall at 12.30pm. The parade will then officially begin at 1pm with over 60 colourful entries taking part. The lead band this year will be Waterford’s own Barrack Street Concert Band.
Included in the 2018 entires will be Waterford Spraoi, who never fail to entertain the people of Waterford. Director TV Honan loves having the opportunity for Spraoi take part in the Waterford St. Patrick’s Day Parade.
“Spraoi will exhibit all around Ireland on St. Patrick’s Day and will also represent Waterford in the Dublin parade. It is always very important to us that we take part in Waterford’s parade as it holds a very special place in all of our hearts, given that Waterford is the birthplace and hometown of the Spraoi festival. The team are particularly excited to be bringing the Vikings to the parade this year”
In addition to Spraoi’s pageant, the parade will feature a whole host of community, sporting, arts, theatre and entertainment entries who will bring floats, colourful costumes, music and excitement to the streets of Waterford! The parade route begins at the bus station on the Quay, continuing along the Quay onto The Mall where the parade will end.

If you can’t make it to the St Patrick’s Day Parade 2018 then tune into Waterford In Your Pocket on Facebook where you can watch the parade LIVE thanks to Rapid Cabs new Taxi App.  Which you can down load now at http://www.rapidcabs.com/taxi-app/

Following the parade there will be the festive fun and music in John Roberts Square featuring Hack the Bone and traditional Irish music from Cuisle.
To keep up-to-date with events, please check out the St Patrick’s Day Facebook page ‘@WaterfordStPatricksDayParade’.