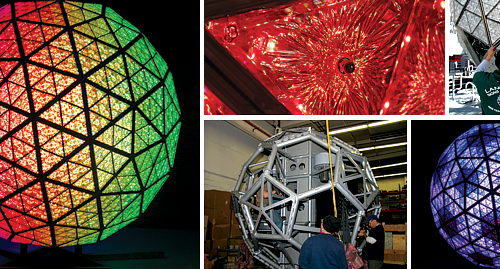 The Time Square Ball drop is synonymous with New Year celebrations in the USA.  The Time Square Crystal Ball starts to drop every year at a minute to midnight and has been seen by millions all around the world and is always a great hit.  But did you know that the 5 and a half ton, or 11,875 pound, ball is made up of 2,688 Waterford Crystal triangles?  Yes Waterford Crystal.  All of the 2,688 pieces are made here in Waterford City by Waterford Crystal.
People began celebrating New Year’s Eve in Times Square as early as 1904, but it was not until 1907 that the New Year’s Eve Ball made its first descent from the flagpole at the top of One Times Square. Seven versions of the Ball have been designed to signal the New Year.
For the millennium celebrations or ‘Times Square 2000’, the New Year’s Eve Ball was completely redesigned by Waterford Crystal and Philips Lighting. Combining some of the latest lighting technology with one of the most beautiful crystals in the world, that creates a symbol, if you will, of look into the future.

It’s great to see Waterford’s Tom Brennan, of Waterford Crystal, doing his city proud on American TV.
This year’s ball features a new crystal design called the Gift of Kindness, with 288 crystals cut into rosettes to symbolize unity, according to the Times Square Alliance.
Secretary-General Ban Ki-moon will push the Waterford crystal button that kicks off the official 60-second ball drop to the New Year, per the Times Square Alliance and Countdown Entertainment, co-organizers of the annual Times Square New Year’s Eve event.
The event will mark the final act for Ban, of South Korea, as secretary-general: The last day of his 10-year term is Dec. 31. Portugal’s Antonio Guterres will take over on January 1st 2017