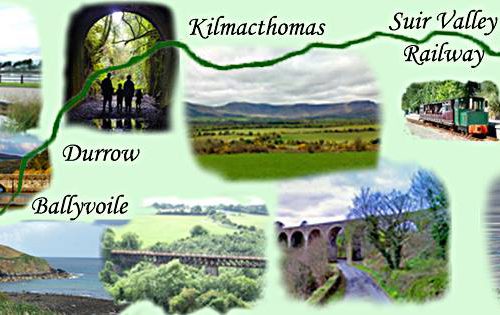 We thought we’d share with you a few videos and links with you to show you what you can expect.  Showing you some of the beauty that you will witness along the way. To view an interactive map of the Waterford Greenway click HERE

This video shows the 2 mile round trip from the Kilmacthomas Viaduct to the new bridge that crosses the main Waterford- Cork road and thanks to Waterford Epic Locations for the video.

It’s hard to imagine the amount of work that went into creating the Waterford Greenway but this video from Waterford Epic Locations  shows the before and after of the Durrow Tunnel (which is nearly 400m long and fully lit.

If you haven’t got a got a bike then there is no need to worry because we have you covered. There are plenty of ways to hire bikes at very reasonable rates. Check out the Bike Hire Companies HERE
There are plenty of places to Park Your Car along the route and access points.  We would ask everyone using the Waterford Greenway to follow this simple code.

We look forward with anticipation to the remaining 23 kilometres between Waterford City and Kilmacthomas to open. But in the meantime enjoy a beautiful journey through time and nature across three tall viaducts and a long atmospheric tunnel, all the way from the river to the sea.

Along this route in Ireland’s Ancient East is a Viking settlement, Norman Castles, medieval ruins, an old workhouse, deserted railway stations and a heritage railway train, Waterford and Suir Valley Railway that still runs along part of the track.  Or visit Mayfield Birds of Prey at the old work house at Kilmacthomas.  For all the information you need to have a great trip click on the Visit Waterford Greenway link HERE.

A very special thanks to Visit Waterford for such a great initiative check out their website for lots more information on Waterford! So all that is left for you to do is to get out there and enjoy what Waterford has to offer!