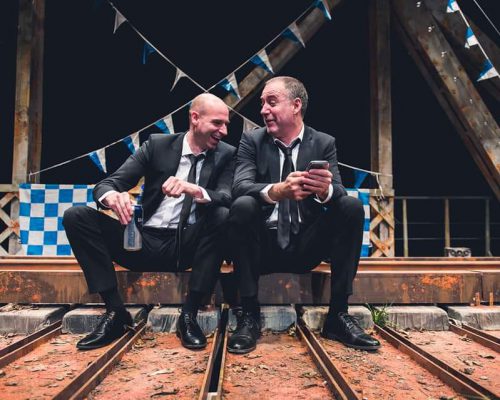 A massive well done to Waterfords Brian Doherty (or Dots as he is known to many of us) on his win at the Irish Times Theatre Awards.  The Irish TImes Theatre Awards are now in their 23rd year but this year was the first time that it won’t take place with the pomp and circumstances of what should have been a brilliant night at the National Concert Hall.
Brian is a London-based Irish actor who has appeared with The Abbey Theatre, RSC, Royal National Theatre, Druid Theatre Co., Royal Court, several West End shows and in many TV and film productions.


He has won best actor for his performances in Rough Magic Theatre Company‘s Agamemnon in Hecuba and as Dog in The Red Iron by Jim Nolan, produced by Red Kettle Theatre Company.
Brian is a Red Kettle veteran. Originally from Manor Lawn here in Waterford City, he made his acting debut in Jim Nolan’s The Black Pool back in 1983 and went on to feature in a series of landmark Red Kettle productions before moving to Dublin and then to London where he now lives with his wife and daughter.
Brian’s distinguished UK stage career has seen him perform leading roles at The National Theatre, The RSC, The Royal Court as well as several West End productions. He returns regularly to Ireland and in recent years, he has played with Druid, Rough Magic, Lyric Theatre and the Abbey where his performance as Finbar in Tom Murphy’s The Wake was nominated in the category of Best Supporting Actor at the 2016 Irish Times Theatre Awards.
Brian recently appeared in the premiére of the Mick Flannery musical Evening Train at the Everyman Theatre, Cork and he is currently in rehearsal with Rough Magic Theatre for Marina Carr’s Hecuba. TV appearances include Casualty, Fair City and Rebellion.