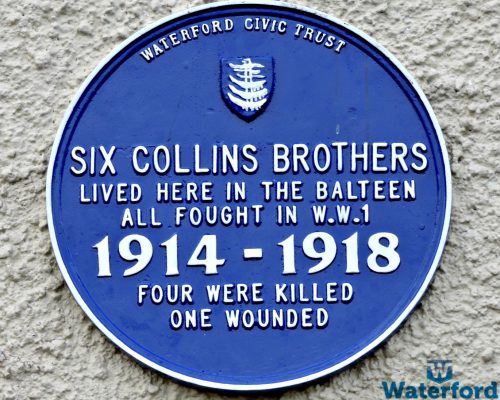 On the 11th of November the guns fell silent in World War 1, the war to end all wars.  A war that they said would be over by Christmas, when it started in 1914, took the lives of millions across Europe.
In Waterford some 4,800 people volunteered to join the army and fight the Kaiser of those 1,100 were killed.  One tragic story is of the Collins Brothers from Philip Street in Waterford City.  Six brothers joined up and four of them were killed.  Waterford’s Band of Brothers.
Stephen Collins killed on the 19th October 1914, Michael Collins on 8th of May 1915, John Collins on the 9th of September 1916 and Patrick Collins on the 29th of March 1918.  A tragic loss to any family

Yesterday, Saturday November 12th, the brothers were remembered in Waterford City buy the people of Waterford and the Waterford Civic Trust with the unveiling of a Blue Plaque on the street where the family lived.

Why did so many join the army during World War 1?  John Redmond MP for Waterford at the time told the people of Ireland that fighting in the war would lead to Irish Independence.  It was for this reason that so many young men joined the armed forces.  While Redmond’s intentions were commendable as leader of the Irish Home Rule Party, many like Redmond could not have envisaged the unbelievable loss of life that the war would inflict.  38,000,000 killed or wounded across Europe.
The Irish Time’s wrote a fascinating insight into the story of the Collins Brothers which is available HERE

In Flanders Fields, by John McRae

In Flanders fields the poppies blow
Between the crosses, row on row,
That mark our place; and in the sky
The larks, still bravely singing, fly
Scarce heard amid the guns below.

We are the Dead. Short days ago
We lived, felt dawn, saw sunset glow,
Loved and were loved, and now we lie
In Flanders fields.

Take up our quarrel with the foe:
To you from failing hands we throw
The torch; be yours to hold it high.
If ye break faith with us who die
We shall not sleep, though poppies grow
In Flanders fields. 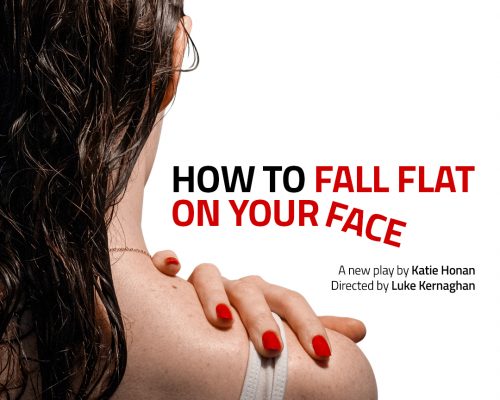