Daytripper 2018 the Best Gig of the Summer 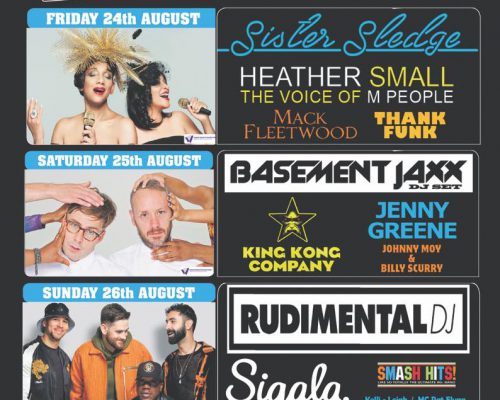 Daytripper 2018 returns to Waterford City centre at The Gasworks for it’s 6th edition on the last weekend of August, with 3 days of music this year from Friday 24th to Sunday 26th. This is our second year on the Waterside and we think everyone will agree that it’s the best of the 3 sites the festival has used to date, with it’s large open space and close proximity to Waterford’s main entertainment district at the Apple Market.

The date moving to the last weekend of summer proved a winner too last year, with everyone enjoying one last blow out before returning to school, college or the normal work routine.
Over the weekend the festival features 6 international acts and 9 Irish acts with music from the 80s, 90s and 00s, right through to current chart acts. And one thing all our acts share this year is their love of a PARTY !

The opening night of Daytripper 2018 features one of the most iconic female groups of all time, Sister Sledge, who dominated the singles chart in the 80s with hit after hit like “He’s The Greatest Dancer”, “Lost in music”, “Thinking of You”, “We Are Family”, “All American Girls” and “Frankie”.
To make the party even better, they are joined by Heather Small (M People) who had a similar level of success a decade later in the 90s with Top 10 hits like ‘Moving On Up’, ‘One Night In Heaven’, ‘Search For The Hero’ and her Number 1 solo hit ‘Proud’.
Completing the Friday night bill are Europe’s top Fleetwood Mac Tribute, Mack Fleetwood, and Waterford’s own funk-soul-brothers, Thank Funk, playing the greatest hits of Chic, Stevie Wonder, Michael Jackson, Jamiroquai and more. I Think it’s safe to say that this is going to be the biggest singalong session the Waterside has ever seen.

Tickets for Friday night at Daytripper 2018 can be bought HERE.

Dance music is 30 years old this summer, having been introduced to the UK & Ireland in that legendary ‘Summer Of Love’ in 1998. One of the biggest names in dance, Basement Jaxx, fly into Ireland on the Saturday of Daytripper to play a headline DJ set that is featuring at all the big dance music events of the summer, including South West 4 in London and a residency at the infamous Hi Ibiza club.
They are joined by the best live dance act in Ireland, hometown heroes King Kong Company. They drew the largest crowd of the weekend to the 10,000 capacity Cosby tent at last year’s Electric Picnic and we don’t need to tell you how good they are going to be down at the Waterside.
Completing the Saturday bill are Ireland’s best loved and most successful DJ, Jenny Greene, with an ‘Electric Disco’ retro classics set and the original Party Boys, Johnny Moy & Billy Scurry, with a back to back set last seen in Waterford at a sold out Roxy Reunion 5 years ago.

Tickets for Saturday night at Daytripper 2018 can be bought HERE.

When Clean Bandit were announced for Daytripper last year they had just been at Number 1 in the UK Singles chart with ‘Symphony’. We are delighted to repeat that feat this year as Rudimental, who topped the charts with recent hit ‘These Days’ are Sunday night headliners. They are the ultimate festival act with feelgood vibes, great interaction with their audience and a set full of summer smashes like ‘Waiting All Night’, ‘Feel The Love’, ‘Free’, ‘Right Here’, ‘Not Giving In’ and their Ed Sheeran collaborations ‘Lay It All On Me’ and ‘Bloodstream’.
The ‘Very Special Guest’ for Sunday is Sigala who has had 5 Top 10 hits in the last 3 years. Also on the bill are; rising UK star Kelli-Leigh the voice of two Number 1 UK hits, ‘More Than Friends’ (James Hype) and ‘I Got You’ (Duke Dumont); MC Pat Flynn from the South East who has a large loyal following for his tracks and Marshal, resident DJ at Waterford’s biggest club, Project.

Tickets for Sunday night at Daytripper 2018 can be bought HERE.