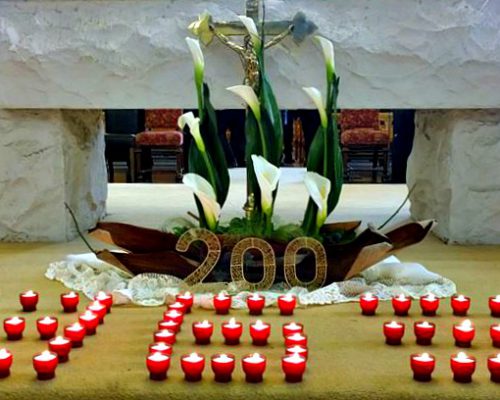 The coastline of Waterford is one of the most beautiful coastlines in the whole country. With its inlets and coves, beaches and headlands, cliffs and harbours, a coast where so many of us love to visit and enjoy the splendour of what it has to offer.
But we also have to remember and respect that the sea also is a terrible beauty and when Mother Nature starts to churn up the seas and wind the full force of its power can be witnessed as a storm can change the gentle coastline into a living hell. It was in a storm like this that that 200 years ago on the 30th of January that the worst sea disaster that Waterford has ever witnessed.
The sinking of the Sea Horse on January 30th 1816 will be forever remembered for the loss of 363 souls in the Bay at Tramore. Men, women and children all lost their lives on this faithful day.

200 years later a committee was formed in Tramore to commemorate the sinking of the Sea Horse and to remember those who lost their lives. Starting with an ecumenical service in the Holy Cross Church in Tramore officiated over by Dean Maria Jansson and Bishop Alphonsus Cullinan; attended by Mayor of Waterford City and County John Cummins, British Ambassador to Ireland Dominick Chilcott as well as members of The Oireachtas and Irish The Defence Forces along with the Duke of Lancaster’s Regiment.


Wreaths were laid at the Sea Horse Memorial Monument at the Church of Ireland and also on the beach where many of the bodies were washed ashore.

Members of the RNLI, Irish Coast Guard, Bunmahon Lifeguard Club, Irish Water Safety, Order of Malta, Tramore Cliff and Mountain Rescue, Tramore Sea Rescue, Civil Defence and Emergency Services along with Rescue 117, the men and women who work tirelessly to keep us all safe and from harm’s way were in attendance, to show their respect and remember those who lost their lives on that fateful day 200 years ago.