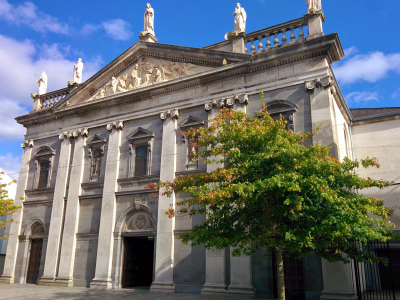 It is a monumental building of national importance. The facade in an elaborate classical style is distinguished by the elaborate particularly because of the detail of the high quality stone masonry. The interior of the cathedral is particularly well maintained and incorporates many features of outstanding artistic importance, including delicate stained glass windows by the Meyer Company of Munich, together with timber galleries and a vaulted roof of technical and engineering interest. One of the best known landmarks in the city the cathedral and is a centrepiece in the streetscape of Barronstrand Street. In 2000, the square near Barronstrand Street (formerly known as “Red Square”) was re-named as “John Roberts Square” in light of the influence he had over the architecture of the two Cathedrals in Waterford. The size and the grandeur of the church is a sight to be seen.

Cathedral of the Most Holy Trinity

Cathedral of the Most Holy Trinity, Barronstrand Street, Waterford, Ireland
Get Directions