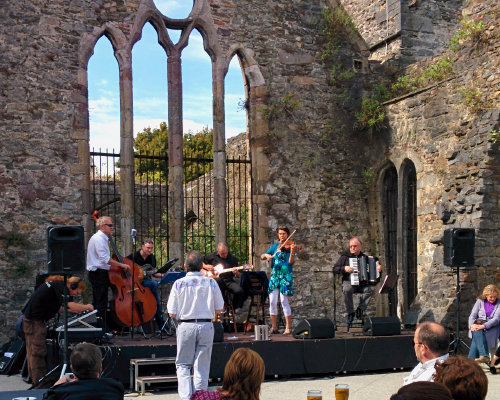 The first Franciscan friary was built around 1240 which was only fourteen years after the death of the founder of the order Francis of Assisi. Hugh Purcell who gave the church to the Franciscans in 1240, asking them in return to pray for him once a day.

During the thirteenth century the friars received an annual allowance for the purchase of new habits from Henry III of England. The friars habits were made from undyed grey woolen cloth, the cheapest available, this was a sign of their humility. After the reformation and during the reign of Henry Vlll. The friary was dissolved in 1540. In 1544, Henry Walsh, a wealthy Waterford merchant received a charter from Henry VIII to convert the Friary into an almshouse which was known as the Holy Ghost Hospital. The almshouse remained on this site until 1815 when it transferred to a new location on the Cork Road. It is still in operation today and is one of the oldest charitable institutions in Ireland.

Standing outside the ruins of the 13th century church is a statue of Luke Wadding, the Waterford-born Franciscan friar who persuaded the Pope to negotiate with Charles I on behalf of Irish Catholics. Wadding is responsible for putting St Patrick’s Day on the liturgical calendar. Greyfriars was one of the first friaries in Ireland.

Greyfriars was the scene of the surrender of four Irish chieftains (the O’Conor Don, de Burgo, O’Brien and O’Kennedy) to Richard II in 1395. The friary was suppressed on 2nd April 1540, but the friars were able to remain in the city. Henry VIII granted a charter in 1544 to convert part of the building into a hospital-cum-alms-house, this being the original Holy Ghost Hospital. The church was used for burials, then (in 1693) by some French Huguenots, and later by the Methodists. These latter afterwards built a church on the site of the convent. Waterford’s well known architect John Roberts is buried here.

Part of Greyfriars Church today serves as a municipal art gallery. However, this church turned art gallery forms just a part of the greyfriars church site. Much of the ruins of the church still remains and can be seen and explored.

The current Franciscan church at Lady Lane in the heart of the City was completed 1834 and refurbished in the 1930. The Franciscans continue the work they started almost 800 years ago in the city.