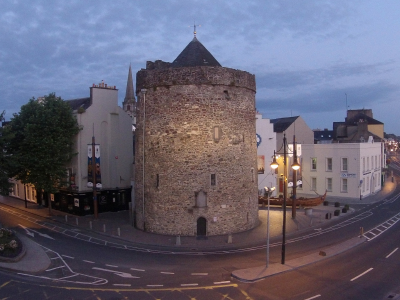 Reginald’s Tower is Waterford’s most famous landmark and is Ireland’s oldest civic building. It has been in continuous use for over 1000 years. The first tower on the site was built by Vikings after 914 and formed the apex of the triangular settlement, an area known today as the Viking Triangle. In 1170 a Norman invasion force led by Richard de Clare, 2nd Earl of Pembroke, more famously known as “Strongbow” captured the tower and in doing so heralded the fall of the city. The tower got its name from the ruler of the city at the time Ragnall MacGillemaire who was held captive in the tower. It is alleged that it was in the tower that Strongbow met Aoife daughter of the King of Leinster Dermot MacMurrough and their subsequent marriage at Christ Church Cathedral in the city was to change Irish History for ever.

It was then in the 12th century that it was rebuilt by the Anglo Normans with the top two floors being added in the 15th century. The tower was of great importance to the city not only as the main defencive tower but also as a building of civic importance. The tower was visited by King John in 1210 and and Richard ll in 1394 and 1399 where he left Waterford as King of England and Wales only to be captured by the future king of England Henry the Vl on his arrival back to England and forced to abdicate. In 1463 a mint was established by the Irish Parliament and in 1495, the tower’s cannons successfully defeated the forces of Perkin Warbeck, the pretender to the throne of Henry VII. It was this defeat and act of loyalty that earned the city its motto “Urbs Intacta Manet” – “Waterford remains the unconquered city”.

Until about 1700 the tower was the strongpoint of the medieval defensive walls that enclosed the city and defending the city from any approach from the sea. In later years the tower became munitions store and a prison. In the late 19th and first half of the twentieth century it became the residence of the Chief Constable of Waterford The tower is now home to our Viking heritage dating back over 1100 years where you can see a full set of weapons from a Viking warriors grave the only set to survive in Ireland, artifacts, musical instruments, models of the old city and much much more.