Waterford Music: "Drop the Shadow" drop by for chats! 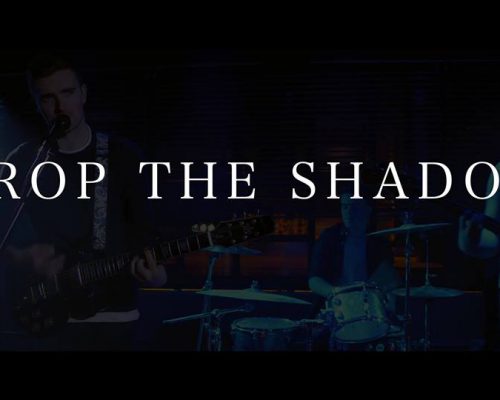 It’s rare to find so much talent tied up in just three people- Mike Walsh (teacher, singer and actor extraordinaire, yes you might have seen him in the Denny sausages ads on d’telly) together with esteemed bassist Sean Carey and BIMM music student Eric Walsh have joined forces to create “Drop the Shadow“, a band with a catchy 90s rock/grunge sound, that you’d be super jealous of, …if they weren’t all so,… well lovely! We had a chat with Drop the Shadow singer and Gaiety actor himself Mike Walsh on starting Drop the Shadow and drunken ramblings on Raglan Road at 4am no less…

Being honest, it’s probably been going since Eric (my younger brother/ Drummer) was old enough to pick up a pair of drumsticks and join me. I’ve been writing songs for quite a while and gathered about 15 or so favourites that I’ve introduced to the lads to work on for now.  We were joined by one of the Deise most talented bass-slappers in Sean Carey, and went straight into the studio to record ‘Break The Fall’.

I have a very broad taste in music and my Spotify is a serious genre hopper. As a three piece we’re very much comfortable in finding space where it’s needed and working on how each instrument can complement the other.  It’s interesting hearing the different reactions to the debut single and what each person hears from both a lyric and sound point of view.
‘Break The Fall’ itself is a blend of a few different sounds for me guitar-wise but it does dip into the tones of bands like the Smashing Pumpkins and other 90’s acts.

We’ve all got a decent past gigging history with other projects and cover bands in the past, but last Saturday in the Metalman Bar Waterford was our first outing as a trio!We’re launching our single “Break the Fall” in Waterford on November 24th in the Beer Keeper Bar, and also in Dublin too, all are invited! We’ll be straight back into the studio then and plough on into 2019.

Yeah, I’m Primary School teaching in Dublin with the past 4 years and tipping away at acting just as long. I’ve gone back into The Gaiety School to complete the advanced Performance course to brush up on the stage side of the trade.   Eric is a music student in BIMM Dublin and works weekends in Musgraves back home.  Sean (26)  is based in Waterford, works as a session bassist and also in GOMA art Gallery.
Personally I plan out the week on a Sunday for a couple hours so we can divvy out jobs between the three of us. Otherwise it can be a bit chaotic trying to balance everything in and outside the band. When it gets that way I can normally be found wandering  Raglan Road at 4am, screaming at traffic.

I think good communication, practice and planning is key. It cuts out all the nonsense that can pop up. I think by organising and setting out what each practice session should achieve, you can keep track of what’s working and what’s not working with some songs. After that , you can relax and enjoy it. Sure what would I know – these are our first gig together as a trio. It could go completely tits up and I could end up wrestling Eric through a window halfway through the set…
Drop the Shadow launch their new single “Break the Fall” in the Beer Keeper Bar Sat November 24th. See all details here
Check out our pre-gig chat with Drop the Shadow at the Metalman Bar Waterford here
See the boys doing what they do best on Spotify, iTunes, Instagram Facebook and Youtube! Support local original music and give them a like, a follow and a listen!