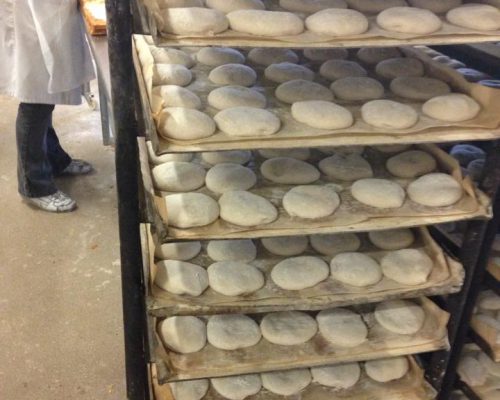 All across the world bread is consumed for breakfast in many different forms.  From toast to croissants, Bagels to crumpets the variety seems to be endless.  But here in Waterford we have the Blaa and it has EU PGI (Protected Geographical Indication) status, which means that the humble piece of culinary heaven  can only be produced in Waterford.  If somebody makes a breakfast roll anywhere else in the world they can’t call it a Blaa.
The Waterford bakers are unanimous in saying that the  Huguenots introduced a bread product made from left over pieces of dough in the late seventeenth century which we now call the Blaa!
So how is the humble Blaa made?  Well we have a video here for you that guides us through the whole process from start to finish. This this video, by Maria Elliot, is in Irish with English subtitles so it will give you a chance to brush up on your Gaeilge.

We love our Blaas for breakfast or anytime in the morning.  Nothing like having one with sausages and rashers or with a bit of Red Lead, which is a local Luncheon Sausage.  The beauty is that you can put anything you like into a Blaa and there’s nothing like a bag of Tayto Cheese and Onion crisps in a blaa or a “Hang Blaa” (Ham)  and a hot mug of tea!
Slang.ie have this hilarious story, written in the Waterford accent (vernacular)  on how the Blaa got it’s name!

A Waterford pilgrim (whose name is long since lost) was travelling through de holy land circa 33AD. after many adventures (and misadventures) it just so happened dat he ended up in Jerusalem on de night of de last supper of our Lord.
Tired and hungry from all his travels, he came upon an Inn where a small feast was taking place. Being a stranger and with scarcely a few shekels tew his name he decided tew gate crash de party. He hid behind a curtain while de bread was being divided. Craftily he slid one hand out from his hiding place and grabbed a piece of bread.
Peter, one of de guests, saw him and grabbed his hand and with an almighty roar declared, “THAT’S BLASPHEMY,” to which the Déise boy responded “g’way outa dat boy, dat blaas FER ME” and he ran from the room with de sacred bread wrapped up in his blue and white shirt.
On returning tew his native Déise he did his best tew reproduce de bread and de closest ting he got tew it was today’s famous Waterford Blaa.
So there you have it! But how do you pronounce Blaa?  Well Christopher Dunne took to the streets of Waterford to find out.