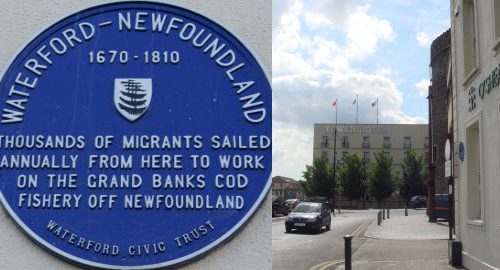 Did you know about the Waterford Newfoundland connection? Emigration was and is always a major topic in Ireland and indeed Waterford and the Port of Waterford has always played a major role in bringing people to and from our shores.  Ships from all over the world would bring their cargos to Waterford, wine, spices, jute, timber and so much more and in turn these ships would export butter, bacon etc.

The port was a real focal point for the south east of Ireland.  English ships would make Waterford their last port of call on their trip across the Atlantic.  Picking up provisions like salt and pork and transporting grain to the colonies in the Americas.  When the fishing industry started to flourish in Newfoundland Canada then the ships started looking for people that were willing and able to work.   This all started in the 1700s
Check out this video on the history of the Irish in Newfoundland.

Men from the South East of Ireland, many of them farmer’s sons with no experience of fishing, would travel to Newfoundland for the summer fishing season and return home for the winter. The interesting point is that all these men lived where there was easy access to Waterford city and that was along the Three Sisters, the rivers Suir Nore and Barrow.

It has been said that between 1800 and 1830, over 35,000 people from the South East of Ireland, with a radius of about fifty miles around Waterford City, settled in a thinly populated Newfoundland. It was in essence a population transplant from the South East to Newfoundland.
Today the fishing is not what it used to be in Newfoundland but the ties are still there.  If you were walking down a street in St John’s you would think that you were walking through the streets of Waterford or any town in the south east.
Did you know that Waterford city is twinned with the capitol of Newfoundland St John’s?  And if you visit Waterford Treasures you will see many exhibits on our association with Tera Nova, the Waterford Newfoundland Connection.  The impact that the Irish have had on Newfoundland can be seen in this video.

One of Newfoundland’s famous sons came to live in Waterford and his name was Thomas Meagher.  It was Thomas that was the first catholic Mayor of Waterford and we will never forget that it was his son Thomas Francis Meagher who gave us the Irish Tricolour that was first flown at 33 The Mall in Waterford City on the 7th of March 1848.
Check out some of the accents in St John’s!