Ireland To Asia A Year On My Bike Report 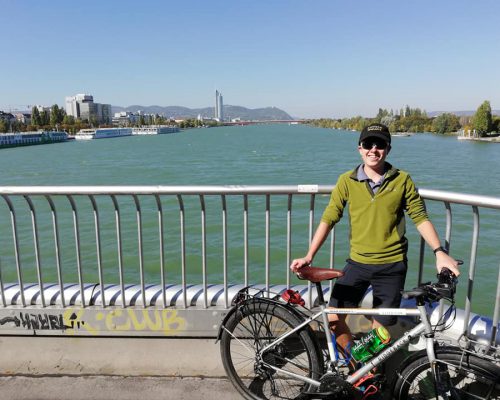 Ireland To Asia: A Year On My Bike Report 1

On the 31st of August we posted about the epic trip that 18 year old Sean Hoban was embarking on (you can see that HERE) and we thought that it was about time that we updated you on his journey.
Sean’s trip is called “Ireland To Asia: A Year On My Bike” and the journey will take Sean from France, Germany, Austria.Hungary,Serbia, Bulgaria,Turkey, Georgia, Azerbaijan, Kazakhstan, Uzbekistan, Tajikistan and on to Kyrgyzstan.  A trip that’s around 8 thousand miles.  Sean doesn’t yet know his final destination but said that he will make up his mind along the way.
As we write Sean is in Vienna in Austria and we thought that we would share some of his photos and stories along the way.  So here we go.
After arriving in France he visited the city of Caen as he said
“I also saw a couple more War Cemeteries. Pretty grimm looking at all the gravestones, not one person over 30 years old. Many 18 year olds like myself”.

As he was travelling he was meeting some great people along the way and even people who wanted to cycle with him part of the way.  One guy cycled 55km with Sean.  En route to Parise he snapped these photos.

On the 6th of September Sean finally arrived at Paris
“After 5 full days of cycling and about 400km later. It’s finally time for some rest. I plan to spend a couple nights here in Paris to rest my legs”.

Remember Antoine from my first day of cycling, well it so happens that his parents live in Paris and they were happy to welcome me into their home for the night. So I moved my bike and Antoine’s father took me for a walk around the Arc de Triumph and the Eiffel Tower. Learned a lot about the history of Paris and how it came to be.  I had a beautiful dinner with Antoines parents. True French cuisine.
After 5 days in Paris it was time to hit the road again.  Cycling cycling cycling but what great fun.  The weather wasn’t always the best and it was often hard to get wifi.   He reached the Champagne area and sure he had to try out the local produce……………….grapes.

From there it was into Strasbourg and then Germany.

From Strasbourg it was on to Munich.  “After 5 days on the road from Strasbourg, I am going to take some rest in Munich

🙂And coincidentally, Oktoberfest is in full swing. My budget will only allow for one or two haha
The last few days have been really nice. South Germany is beautiful. The cycle paths have been amazing, the weather is also perfect. I had tailwinds for the past two days so I was flying.
After Munich I plan to cycle towards the Danube River. The cycle paths run all the way to Romania so Ill see where I end up. Now for some rest”

This was a post from the 30th of September.
“Last couple days have been a bit mad. I’ve had a few firsts. I also had some trip records too.
2 days ago I left a really cool Warmshowers in the direction of the Danube River. That day I had the longest cycle of the trip (and my life) at 135km. In trying to find a place to stay I kept having to go “5 more km”. This turned a 100km day into a 135km day. Eventually I made it to a campsite right by the Danube River. Just at the beginning of the Danube cycle trail in Passau Germany”.

So the last post from Sean came today Sunday the 7th of October and he made it to Vienna.  The weather wasn’t tbe best but it got better.

So if you want to follow Sean on his epic trip “Ireland To Asia: A Year On My Bike”  then all you have to do is follow him on Facebook at https://www.facebook.com/Ireland2Asia
Best of luck to Sean and we’ll have more photos and reports on his travels again soon.