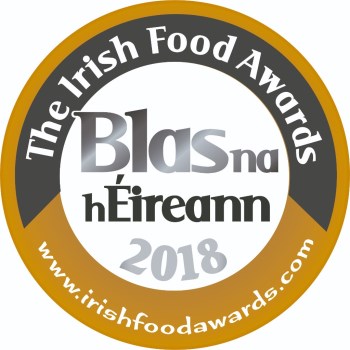 Now in its 11th year, Blas na hEireann, The Irish Food Awards is the biggest competition for quality Irish produce on the island of Ireland. Over 2500 products were entered into the 2018 competition to win Gold, Silver and Bronze Awards in over 100 food and drink categories as well as key awards such as Supreme Champion and Best Artisan Producer.
Did you know that the Blas awards are the biggest blind tasting of produce in the country, and the criteria on which the product is judged as well as the judging system itself, which was developed by Blas na hEireann with the Food Science Dept of UCC, is now recognised as an international industry standard?
Winners from Waterford include The Granville Hotel, The Sea Gardner, Legacy Irish Cider, Pure Food Company, Mezze Middle Eastern Foods, Pip and Pear Baby Foods, Dawn Meats, The Hartrey Kitchen, Carter’s,  Dessert First and Coffee House Lane.

Great to see so many friends picking up awards in Dingle this weekend @BlasNahEireann #Blas18 Congratulations to all and #upthedeise ! pic.twitter.com/5AY75nGrFm

So who won in Waterford?

We picked up the chefs Choice Award for a “must have” product! Thanks to everyone for all the good wishes and congratulations to all the waterford winners today! #deise #blas2018 #waterford @waterford_way @ Dingle, Ireland

We got SILVER at #blas2018! Thank you @BlasNahEireann, we are thrilled. 🤗 Having a Legacy Irish Cider to celebrate! Congratulations to all the winners. #Waterford pic.twitter.com/XiNtGVRPzM

We did it!!! Got the Chef’s larder award for our Seaweed Lavosh Flatbreads @BlasNahEireann along with the person who inspired them @TheSeaGardener #Blas2018 #chefslarder pic.twitter.com/arono1ur9d

We are honoured to have won gold awards @BlasNahEireann for our 50 Day Dry Aged Rib of Beef and Bone in Strip-loin as well as best in Waterford. #blas2018 pic.twitter.com/S3Tg17joam

Great to see so many friends picking up awards in Dingle this weekend @BlasNahEireann #Blas18 Congratulations to all and #upthedeise ! pic.twitter.com/5AY75nGrFm