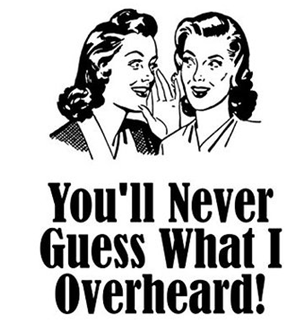 We’re back this week with another round of wickedly wonderful stuff Overheard in Waterford this week! Were you one of the unfortunate people I overheard?:O…Read on and find out!
1.

I overheard a lady telling her friend about this in Tramore yesterday, and all I could think is God help that poor girl! The lady on the phone sounded very kind and concerned for the Mormon madam as she explained to her friend the difficulty the young woman was having settling into Irish culture. According to the interweb, Mormoms are not only forbidden to drink, have sex before marriage or smoke, they’re also not allowed to have coffee or tea? Oh God…someone should probably tell this woman to stop offering the poor girl a sit down and a cuppa Lyons…
2.

In fact I think the person who said this may have been right. I overheard this funny liner at a table quiz last Wednesday, when the quizmaster asked “Why was Guinness previously not a vegan product?” The answer is because an ingredient used in the previous filtration process actually contained…you guessed it… fish bladders! Yep, there’s no way you guessed that. So, yes, you sneaky conniving quizzers, the judges probably definitely knew you were cheating!
3.

Oh God, I laughed so much at the cinema on Tuesday last, not because of the movie, but because of these wans sitting behind me. In her defence, if anyone has actually seen “Searching”, they’ll probably understand why this young one didn’t know the screen was playing an actual movie? Even though they kicked my seat a few times, I actually enjoyed their commentary and slags at one another to stop farting.
4.

You’re not going to believe what this was about. There I was, strolling around the People’s Park, when like the pervert that I am, I spied a crowd of youths hiding in the bushes. They were probably max 14, clearly just out of school of a Friday and what were they up to? What do you expect, they were shoving their tongues down one another’s throats, in turn, according to a countdown. Except, apparently these two didn’t wait until their ten seconds in heaven was up! Ah those were the days….when you swapped saliva with almost every guy in class through a rigorous technique of tumble dryer high spin style tonsil tennis. Then you went home with a big red mouth on you and told your mum you’d eaten too many sours at the cinema. Great introduction to romance still strong in the Irish tradition!
5.

I’m not going to reveal when and where I heard this for fear of putting my foot in it! Needless to say when I realised which fella they two huns were ripping apart I felt immediately sorry for him. Little did he know he was being shrewdly appraised for the potential shift. But then I thought, actually, this is what its all about! Didn’t many a relationship actually begin with that ill-judged shift?The lack you find at ten to two in the morning, and desperately lob the gob with,because the club’s about to close and you’re not letting those three jaeger bombs go to waste. Who knows but the poor fella is picking her up now for a second date? Unlikely…. but sure, ’tis all a bitta craic !:)

If you overheard a gas bit of banter in Waterford this week, send it into us at waterfordinyourpocket@gmail.com. Stay tuned for more Overheard in Waterford!