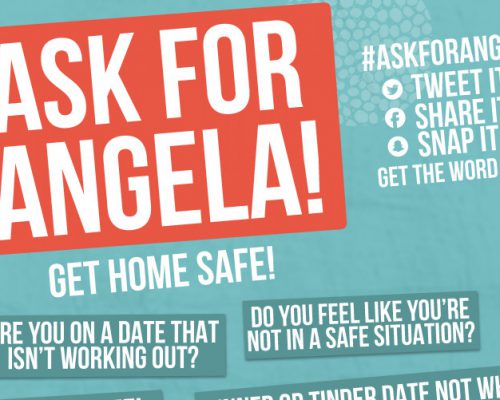 Last November, Purple Flag Waterford partnering with WIT Students Union and working with local venues in Waterford city launched an “Ask For Angela” campaign – a simple code-word campaign for people feeling unsafe while on a night out. The campaign welcomed by local venue owners and managers as a positive step in raising the perception of safety in Waterford.

The idea behind the Ask for Angela campaign is if anyone finds themselves in a situation where they feel vulnerable to approach staff and ask for ‘Angela’ – this code word will alert staff that help is needed to get out of a situation discreetly. Angela was a play on the word (guardian) Angel. The posters are up in male and female toilets, and provide reassurance there is support available if needed.
So if you are on a night out and you feel that you need help then “Ask for Angela”.  It is encouraging to see so many local businesses engaging with the campaign, all with a common objective to protect people who find themselves in vulnerable or distressing situations.
Did you know that Waterford is a Purple Flag City?  So what does that mean?

What is Purple Flag?

Purple Flag is a Gold Standard accreditation recognising Waterford for being a safe, welcoming and friendly destination to socialise, live and work in.
Waterford was awarded the prestigious Purple Flag in February 2015 and it is international recognition of Waterford’s successful, well-managed city centre. It can be seen as the equivalent of the Blue Flag awarded to good beaches.
The Purple Flag award recognises excellence in the management of the evening and night-time economy and signifies the diverse range of offering available in Waterford after 5pm. Within Waterford’s compact and vibrant Purple Flag Zone you’ll find a diverse range of family entertainment, arts and culture venues, shopping, dining, pubs and nightclubs, accommodation and transport – something for everyone.